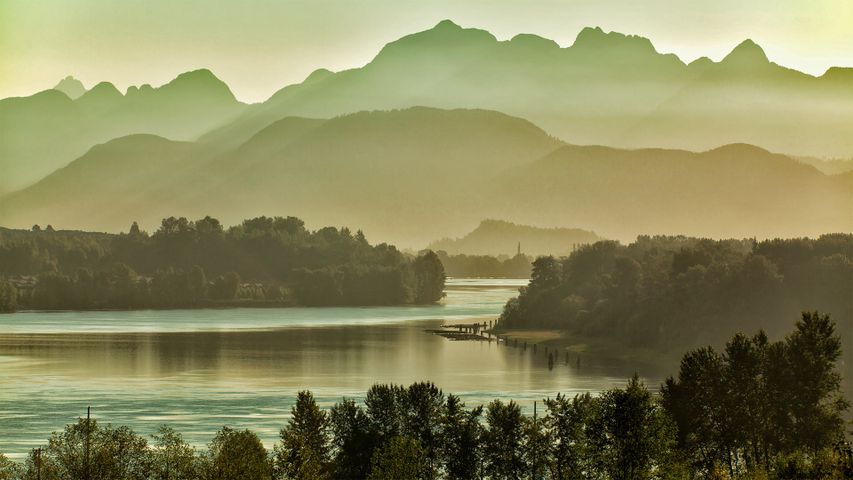 Take me to the river

Today we're recognizing World Rivers Day—a conservation event that branched off in 2005 from its source, BC Rivers Day, founded near this British Columbia river's banks 40 years ago today. The Fraser River flows through a showcase of this Canadian province's diverse landscape: It originates in the Rocky Mountains, carves steep valleys through central BC, and irrigates rich farmlands outside Vancouver before spilling into the sea just south of the city. The river flows gently in this stretch, as seen from the span of the Port Mann Bridge east of Vancouver, with the Golden Ears mountains in the background. Thanks to preservation efforts, the Fraser's main stem remains completely undammed, with its drainage basin covering 25% of BC's land area.

A drainage basin is what we in the US usually call a watershed: Every river has tributaries, or other rivers and springs that flow into it and add to its volume. A river's watershed is the area covered by the main flow and all its tributaries put together. Watersheds may exist within other watersheds, such as when a tributary is longer than the river it feeds—a classic example is North America's longest river, the Missouri, whose vast watershed is a subdivision of the sea-bound yet shorter Mississippi's.

Delicate environments like rivers are interconnected, and actions have downstream effects—that's what World Rivers Day aims to highlight through hands-on cleanup opportunities and virtual events.