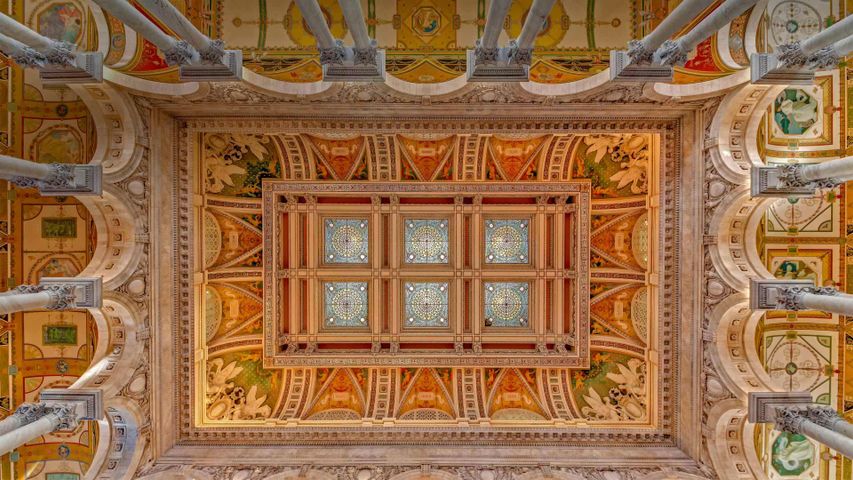 One for the books

Today is the kickoff to the 20th Library of Congress National Book Festival, and for the first time it will be held entirely online. Nearly 120 authors, including Colson Whitehead, John Grisham, Ann Patchett, Walter Mosley, and Tomi Adeyemi, will appear on virtual stages to discuss the written word from September 25-27.

When the festival launched in 2001, authors and participants gathered on the grounds and in the buildings of the Library of Congress on Capitol Hill in Washington, DC. Over the years, as the National Book Festival grew to become one of the most notable US literary events, the festivities expanded to the lawn of the Capitol, then to the National Mall, and in recent years to the Washington Convention Center.

With the festivities occurring virtually this year, we're turning our gaze back to the stately interior of the main building of the Library of Congress, the Thomas Jefferson Building. In this image, we're looking up to the ceiling and cove of its Great Hall. Surrounding the six skylights is decorative aluminum leaf, which was more precious than silver during the 1890s when the building was constructed. When the building opened its doors to the public in 1897 it was said to be the largest library in the world and it remains so today. Its vast holdings are stored in many buildings, including the Thomas Jefferson Building, which was named for the third US president. It was Jefferson's personal 6,000-plus book collection that helped rebuild the Library of Congress' collection after British troops set fire to the original library during the War of 1812.

Main Reading Room of the Library of Congress, Washington, DC