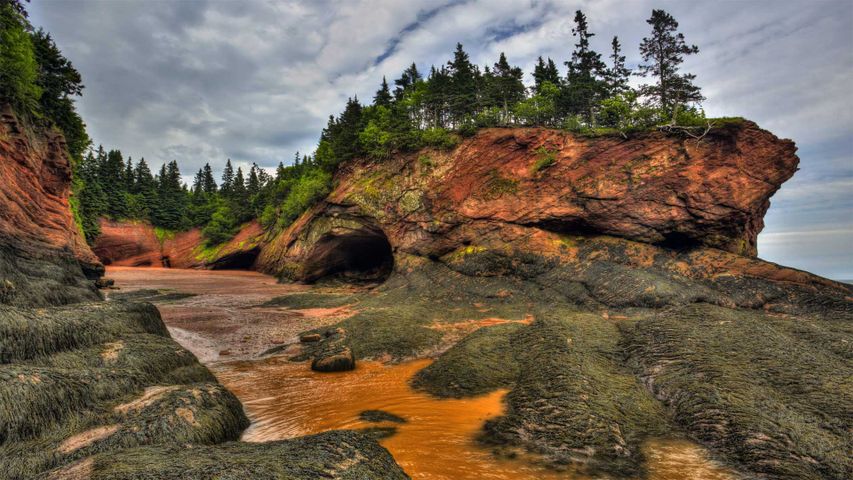 In honor of Canada's National Acadian Day, we're on the shores of New Brunswick as the ocean recedes to reveal the Bay of Fundy's massive intertidal zone. The tide is a big deal at the bay—more than five times bigger than in most places. Typical tides around the world have a range of 3 to 6 feet, but these waters drop as far as 50 feet from high to low tide.

National Acadian Day celebrates the legacy of the Acadians, Canada's first permanent French residents. The agrarian Acadians first settled what's now Nova Scotia in 1605 and spread to nearby areas, like this one. As they established themselves over that century, the Acadians developed an identity distinct from the rest of New France. This unfortunately didn't shield them from Old World conflicts as France's longtime enemy, Britain, occupied and tried to conquer Acadia multiple times, finally succeeding in 1710. The British ultimately expelled the Acadians four decades later, a forced relocation to other British colonies where Acadians were often pressed into servitude—or to France, the mother country many Acadians never knew, and to which many wouldn't survive the voyage.

But that tragic chapter is far from the end of the Acadians' story. Some of them eventually returned to Acadia, and their culture still permeates Canada's Maritime Provinces—as well as another unlikely locale. Thanks to France's friendly 18th-century relations with Spain, many exiled Acadians were able to settle the then-Spanish-controlled bayous of Louisiana—where 'Acadian' eventually morphed into 'Cajun.'