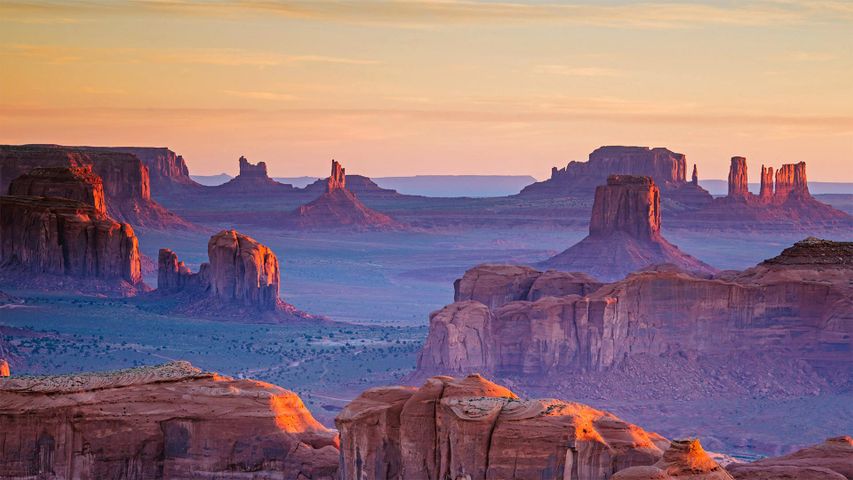 This expansive and iconic view, taken from Hunts Mesa in the Navajo Nation, is none other than Monument Valley, also known as the Valley of the Rocks when translated from the Navajo language (Tsé Biiʼ Ndzisgaii). The red sandstone formations are synonymous with the American Southwest and have stunned moviegoers for nearly a century. The largest of American Indian territories, Navajo Nation covers more than 70,000 square kilometres and reaches into portions of Arizona, Utah, and New Mexico.

During World War II, an elite team of Navajos left their homes to join the US Marine Corps and solve a communications challenge. In the Pacific, many of the U.S. combat codes had been cracked by the Japanese army and navy, leaving U.S. troops vulnerable to attack by Axis forces. But in 1942, the first 29 Navajo recruits helped develop a new undecipherable code. They used common words and phrases from their tribal language to convey some messages and created special codes to describe military terms; for instance, various weapons of war were assigned Navajo bird names. Code Talkers could encode, send, and decode a three-line English message text—without error—in roughly 20 to 150 seconds. It took machines of the day at least 30 minutes, sometimes longer, to do the same thing.

Some say the U.S. would not have prevailed at the fiercely fought Battle of Iwo Jima had it not been for the Navajo Code Talkers' contributions. And yet, their contributions would go unknown until the program was finally declassified in 1968. Navajo Code Talkers Day was established on August 14, 1982 to commemorate the elite team as well as other Native Americans and First Nations people who had developed codes used in other conflicts.