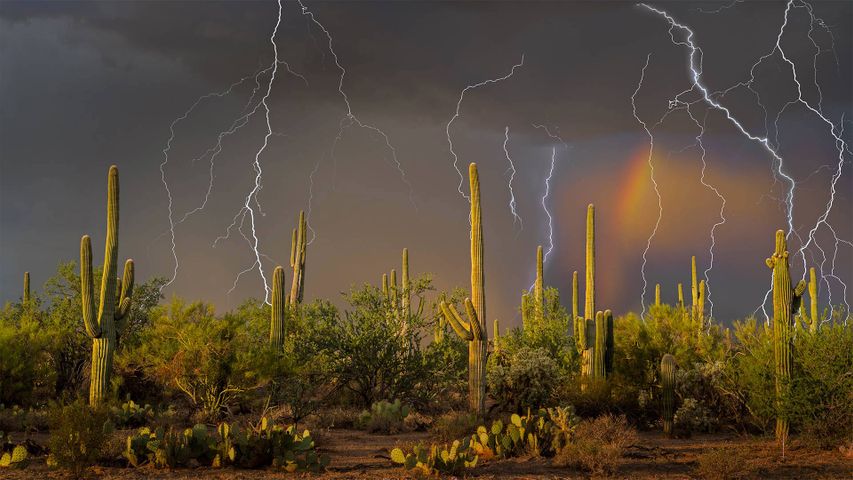 Lightning strikes are common during the summer monsoon in southwestern US states and northwestern Mexico. In Arizona and New Mexico, powerful thunderstorms roll in most every afternoon from early July until mid-September. Here, in the Sonoran Desert north of Tucson, Arizona, severe weather over saguaro cactus makes for a dramatic scene.

The monsoon–which refers to the entire season and not just a single storm—is caused by intense daytime heat, which drives shifts in wind patterns that bring moist air to the generally arid Southwest. Mornings typically begin fair, but as temperatures rise throughout the day, precipitation gathers into clouds that finally burst in periods of heavy rain during the late afternoon and evening. The monsoon storms also bring huge dust storms called 'haboobs,' borrowing the name from similar storms in Sudan.

In Arizona, the monsoon can account for nearly half the state's annual rainfall, which averages little more than 7 inches. Water is precious in the desert, and the region relies on this weather pattern to fill reservoirs and maintain the fragile ecosystem. While dry lightning early in the season can spark wildfires, as the monsoon rain starts to fall, it helps reduce local fire danger.

A humpback whale off the coast of Maui in Hawaii