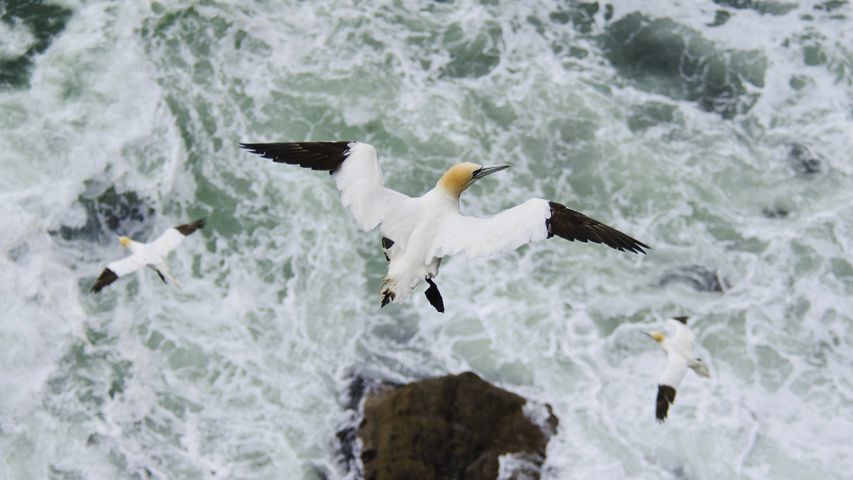 Ready to dive in. The spectacular dives of the northern gannet

Soaring high over the cliffs of Troup Head in Aberdeenshire, these northern gannets are on the lookout for something to eat. These striking creatures are the UK’s largest seabird, with wingspans of up to 2m, and yet are also incredibly aerodynamic. Known for super-fast plunges into the sea from a great height, they fold their wings back as they hit the water at up to 60mph. Torpedoing up to 10m beneath the surface, they snatch herring, mackerel and sandeels in that dagger-like beak and swallow them before resurfacing and taking to the air – all in the space of a few seconds. Despite hitting the water at break-neck speed, their necks usually remain intact, thanks to some special muscles and air sacs in the face and chest which act like bubble wrap, helping to cushion the blow.

Northern gannets can be spotted around our shores between January and August, before they head south for the winter. Troup Head is Scotland’s largest mainland gannet colony, which is saying something as the UK is home to between 60% and 70% of the world’s gannet population, the bulk of which live around Scotland’s coast. Bass Rock in the Firth of Forth is one of the most famous gannet-spotting places, but be warned: It’s said you can smell its colony ten minutes before you arrive, so it’s not for the faint hearted - or those with sensitive noses.