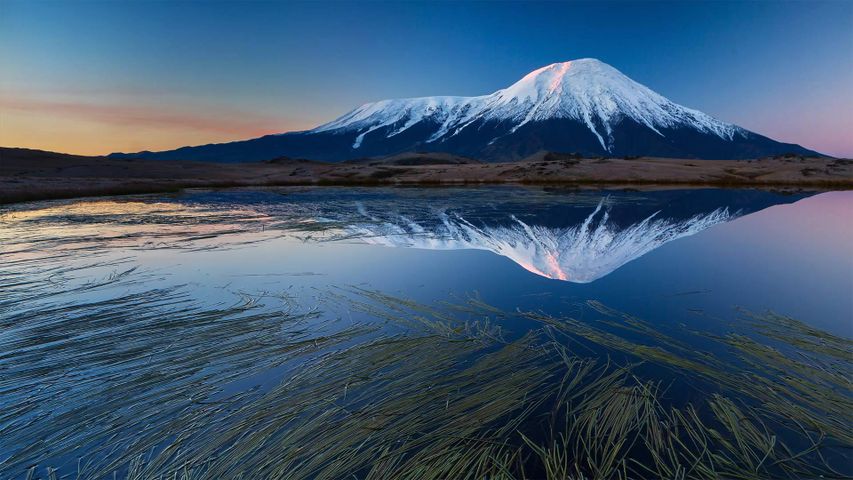 Welcome to the Ring of Fire

Today we're visiting the pair of volcanoes known as Tolbachik—the flat-topped Plosky (Flat) Tolbachik on the left of our image, and the majestic Ostry (Sharp) Tolbachik on the right, which soars 12,080 feet above the Kamchatka Peninsula in far eastern Russia. These are just two of roughly 300 volcanoes scattered through the region; 29 of them, including the Tolbachik complex, are still active. In fact, there is so much volcanic activity here that UNESCO calls the peninsula 'one of the most outstanding volcanic regions in the world,' and has designated it a World Heritage site.

The Kamchatka Peninsula juts out from the Russian mainland between the Sea of Okhotsk to the west and the Pacific Ocean and Bering Sea to the east. The sparsely populated peninsula makes up the western edge of the Ring of Fire, a chain of volcanoes along the Pacific Ocean that account for 90% of the world's seismic activity. Wild, remote, and primal, Kamchatka is home to more than just volcanoes. Among the abundant wildlife that call the peninsula home are the arctic fox, tundra wolf, reindeer, lynx, huge Chukotka moose, and the Kamchatka brown bear that can tip the scales at 1,400 pounds.