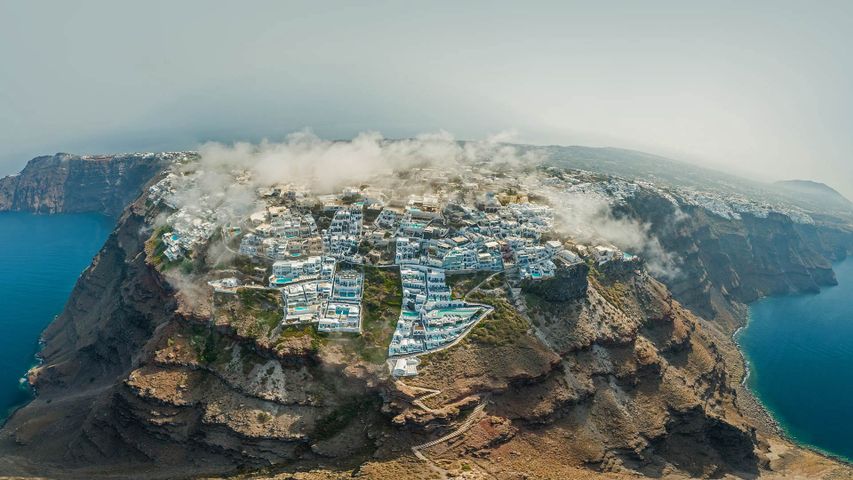 With its romantic sunsets, dazzling ocean views and whitewashed buildings clinging to rocky clifftops, the Greek island of Santorini (aka Thera) is the very picture of an idyll in the Aegean. But this tranquil scene belies the island's explosive geologic history, for this is the site of one of the largest volcanic eruptions in recorded history. The Minoan eruption, about 3,600 years ago, caused the centre of the Thera volcano to collapse into the ocean, leaving Santorini a jagged, crescent-shaped moon atop the sea.

The impact of the eruption was more than just geologic - when the volcano blew its top, Santorini was home to a thriving outpost of the Minoan civilisation. A farming and fishing community had been established at Akrotiri on the island around 7,000 years ago, and by the time of the eruption had developed into a prosperous city built largely on trade with other cultures of the Aegean. Akrotiri had paved streets, delicate pottery, a drainage system and multi-storey buildings decorated in elaborate frescoes. Akrotiri's fortunes ended abruptly, however, with the Minoan eruption, which completely buried the city in pumice and ash.

Extensive archaeological excavations began in 1967, revealing artifacts that were remarkably well preserved by the volcanic material; particularly notable were the elegant, colourful frescoes. It seems Santorini has always been a site for the beautiful things in life.