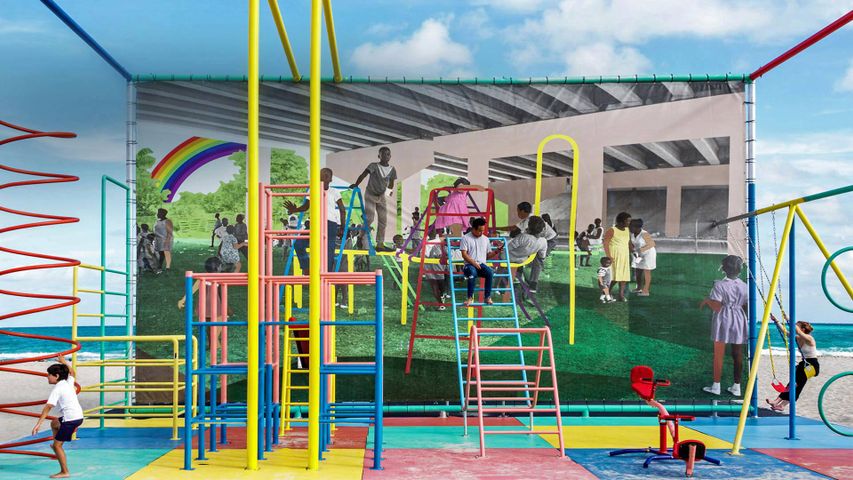 'America's Playground' by Derrick Adams in 2018 in Miami Beach, Florida

In honor of Miami Art Week, which is underway right now in Miami, we're looking at a work called 'America's Playground' by New York-based artist Derrick Adams. The installation was featured during 2018's Art Week and was inspired by a 1969 photo Adams found in the Black Archives at the Historic Lyric Theater in Miami. The photo shows African American children at a playground beneath a freeway in Miami’s Overtown neighborhood, a historically African American neighborhood which was nearly destroyed by highway construction in the 1960s. The construction displaced thousands of black residents from their homes, threatening the livelihood of the community. In the late 1960s, city officials and private donors pieced together funding to install a playground under the new overpass. The park was well used for a time, but due to lack of lighting and maintenance, it eventually fell into disuse.

Adams' work brought the park back to life in a new way. The art installation features a life-size version of the photograph suspended in the middle of a working playground on Miami Beach. One side is black and white, the other is in color, showing the 'vibrancy and promise' Adams saw in the picture.

Contemporary works of art like this can be seen most everywhere you turn in Miami Beach right now, because this is the culmination of Miami Art Week. The annual event kicked into high gear yesterday with the opening of Art Basel Miami Beach, one of the largest art fairs in the US. There are more than 250 galleries participating in Art Basel, and even more fairs, exhibitions, and openings that make up Miami Art Week. The festivities run through the weekend.

A frozen waterfall in the Korouoma Gorge, Finland