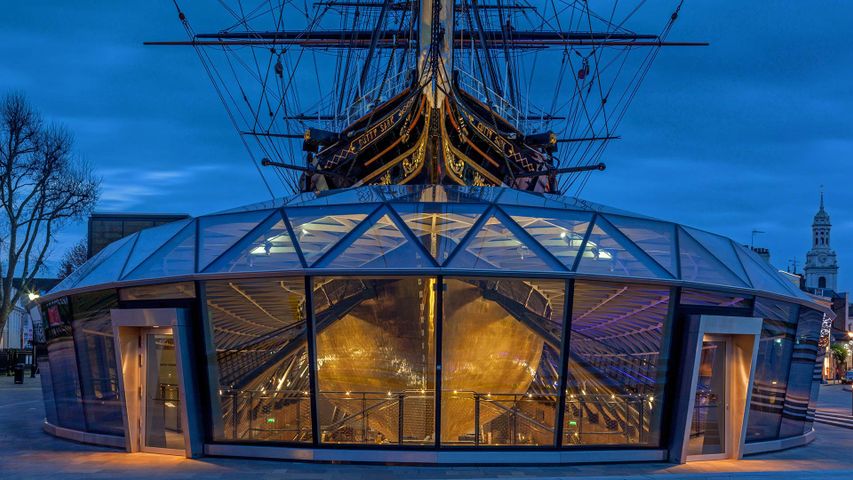 We're featuring the Cutty Sark in today's image to mark the 150th anniversary of her launch on November 22, 1869. Built for speed, this extreme clipper ship - a type of mid-19th-century merchant vessel - began its abbreviated career as a tea clipper racing across oceans 'at a clip' (hence the designation 'clipper ship') to deliver the season's first tea harvest to England. While at times the Cutty Sark was considered one of the fastest ships in the world, its practical use as a cargo ship was ending almost as soon as it was launched. That's because steamships using the much shorter route through the newly opened Suez Canal were able to deliver the highly anticipated tea harvest faster and cheaper. In 1883, the Cutty Sark began hauling wool from Australia, but within 10 years steamships also disrupted this business.

By 1922, she was the last clipper ship still in use when she was sold to Wilfred Dowman, who had her restored and turned into a cadet training ship. In 1954, the Cutty Sark was docked at Greenwich, restored again, and opened to the public. She was closed again for the Cutty Sark Conservation Project in 2006 but was devastated by fire the following year. Fortunately her original masts and many planks were in storage at the time and she was able to reopen, fully restored, in 2012, with most of her original features still intact. Today, visitors to the Royal Museums Greenwich in London can explore all facets of this one-time pinnacle of sailing technology, which is part of Maritime Greenwich, a UNESCO World Heritage Site.

The county of Powys in Mid Wales