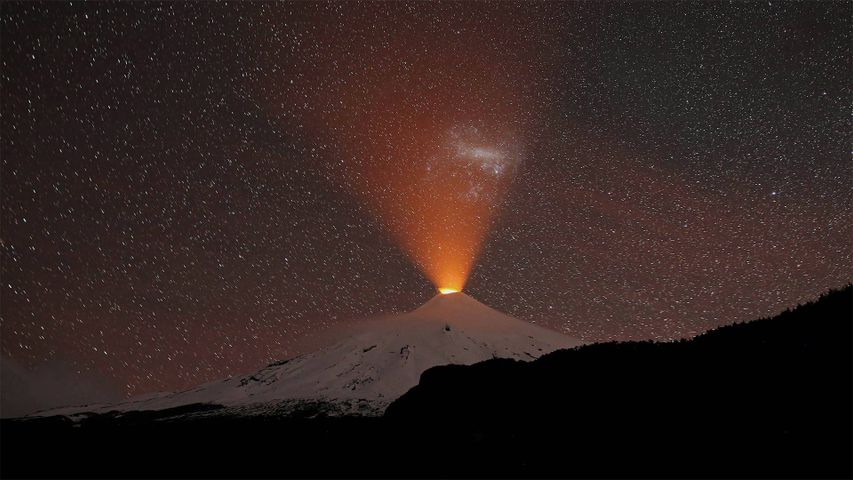 That’s the Villarrica volcano providing fireworks for our observance of Chile’s Independence Day celebrations—called Fiestas Patrias—taking place September 18 and 19. The second-most active volcano in South America, Villarrica is known to the indigenous Mapuche people as Rucapillán (Devil’s House). This photo was taken on September 2, 2018, alarming nearby residents, but it wasn’t nearly as destructive as other relatively recent eruptions, like one in 2015 that prompted authorities to evacuate thousands of people.Chile’s Fiestas Patrias take place each year just before the spring equinox in the Southern Hemisphere, so the Independence Day celebrations double as a kind of spring festival. With most schools and workplaces on a weeklong vacation, people observe the holiday by attending rodeos, going to the beach, visiting family, and—above all—indulging in traditional Chilean food and drink. It’s said that Chileans gain 5 kilograms or more during the Fiestas Patrias. Most gorge themselves on empanadas de pino, which are small pastries filled with minced meat, sautéed onions, hard-boiled egg, olives, and sometimes raisins. The empanadas are typically eaten with a variety of grilled meats from barbecue stands called asados. It’s all washed down with local red wine or chicha, which in Chile is a sweet, distilled grape or apple-based beverage that is almost exclusively drunk during the week of Fiestas Patrias celebrations.