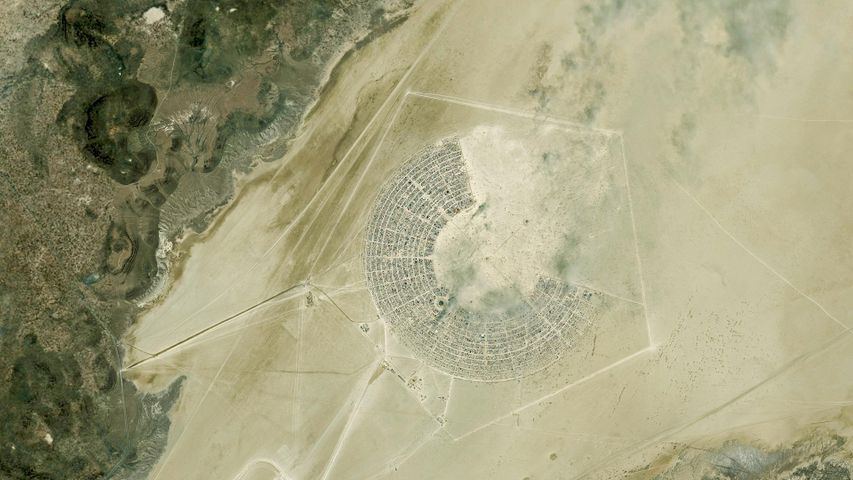 Today we’re viewing North America’s largest arts and music festival—dust free—from a satellite lens. Welcome to Black Rock City, the pop-up home of Burning Man, a raucous festival that takes place in late summer each year on the sun-scorched alkali flats of Nevada’s Black Rock Desert. It all began in 1986 at San Francisco’s Baker Beach when two friends cobbled together a large wooden man. It’s an unusual set-up, a counterculture mecca where gifts reign supreme and money has no value. Festival goers are called ‘burners’ in honour of the massive wooden effigy of a man they build each year, only to set ablaze on the penultimate eve of the event.Attendees may come as individuals or entire communities, planning months in advance to construct grandiose art installations, fantastical floats, cars, and other experiences that defy the logistical constraints of the harsh desert landscape. To do this they must pack in everything they’ll need for nine days, with the full knowledge that it must all be packed out. Any litter left behind is considered MOOP (Matter Out Of Place), so glitter and other items difficult to retrieve from the desert floor are forbidden. Once inside, goods or services can’t be bought, however volunteering and gifting are expected. Part of the mission behind Burning Man is to build a creative and connected community. A worthy goal, especially for those spending a week in the desert with 70,000 of their closest, weirdest, and dustiest friends.

On the John Muir Trail near Mammoth Lakes, California

Time-lapse of a tube anemone