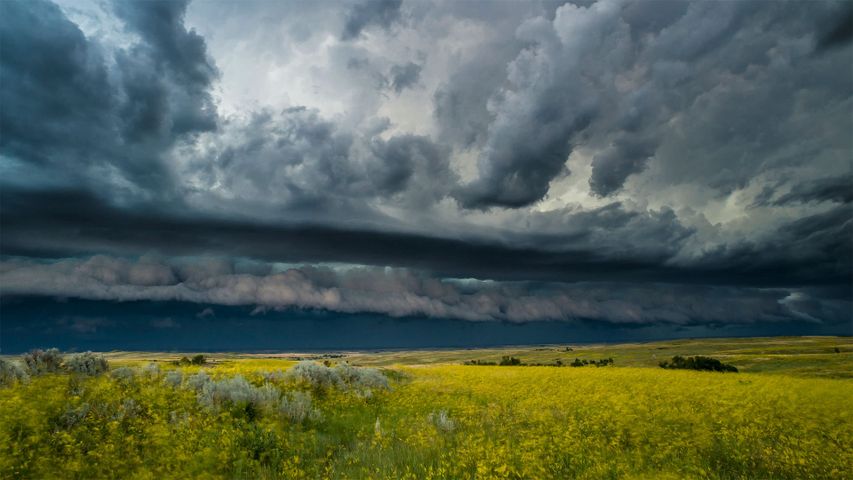 A thunderstorm rolls across the Theodore Roosevelt National Park in North Dakota, USA

Today's image of a thunderstorm moving over grasslands in the Theodore Roosevelt National Park (North Dakota, USA) shows the power of nature and the power of conservation. In 1883, Teddy Roosevelt (US President 1933-1945), then a New York State Assemblyman, travelled to the North Dakota Badlands to hunt bison. During this trip, Roosevelt fell in love with the cowboy lifestyle and the freedom he experienced. Before heading back east, he became part owner of the Maltese Cross Ranch. A year later he was back in North Dakota and had built Elkhorn Ranch. Life in the west inspired Roosevelt, who began writing books and articles about it. He would go on to establish six national parks and 18 national monuments, greatly increasing the size of the National Park System.At the Theodore Roosevelt National Park, the only US national park named after a person, you can see some of the places that helped inspire Roosevelt's conservation efforts. In the park's Elkhorn Ranch Unit, the location of his 'home ranch,' you can experience the same remoteness that he craved. At the South Unit Visitor Center you can see the cabin he used as his home during his first trips to the Badlands, now restored to its original state. And if that's not enough, hours of scenic drives, hiking trails with dramatic views, and wildlife watching are sure to make a visit to the area memorable for any visitor.