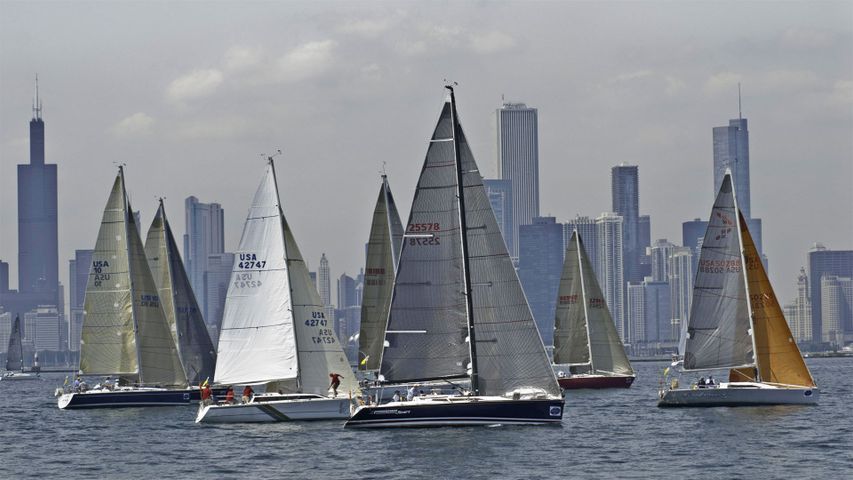 Sailors begin their journey from Chicago to Mackinac Island, Michigan, during the Race to Mackinac

The athletes on these boats are jockeying for position at the start of the Chicago Yacht Club Race to Mackinac Island (pronounced ‘Mack-i-naw’). The ‘Mac,’ at 333 miles long, is the world’s oldest and longest annual freshwater boat race. It’s an amateur event, but make no mistake, these sailors know their stuff. Many go on to race in the America’s Cup. This year’s race is held this weekend. The boats set sail—smallest to largest—just off Chicago’s Navy Pier, passing by the city skyline as we see in our image. When crews pass under the span of the mighty Mackinac Bridge—connecting the Lower Peninsula to the Upper Peninsula—Lake Michigan becomes Lake Huron, and the island appears.The official finish line is just off Mackinac Island between Windemere Point and the Round Island Lighthouse, but many say the race ends at the Pink Pony Patio Bar, where an armada of sailors gather to boast and toast each other. It’s about then that locals prepare for the merrymaking by locking up their bikes. On Mackinac Island, bicycles are a hot commodity because motorized vehicles are outlawed (even police pedal around). The few motorized vehicles on Mackinac are for emergency use, such as ambulances and firetrucks.