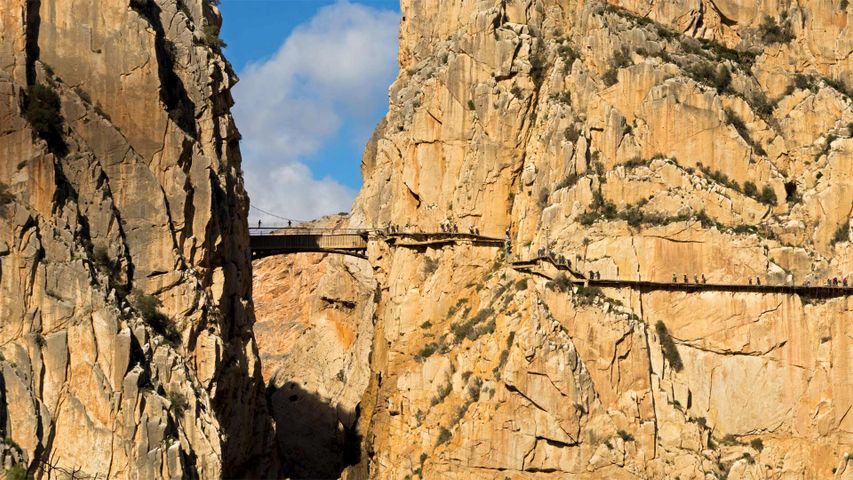 Slip on your sturdy shoes. Put your helmet on, we’re going for a hike

You’ll need to wear a safety helmet before stepping onto the cliff-hanging path that passes above the Gorge of Gaitanes in Spain's Málaga province. Look around, but don’t forget to look down from the glass-floor observation platform. This is your opportunity to fully appreciate the 325-foot drop below and consider what life must be like as a mountain goat. The renovated path is far less dangerous than the original, which for many years had no guard rails. Made for workers back in 1905, the first walkway provided access between El Chorro and Gaitanejo hydroelectric power plants. After King Alfonso XIII visited in 1921, the walkway was given its nickname, El Caminito del Rey (The King’s Little Pathway). But after years of use and lack of upkeep, the nickname was updated to ‘The world’s most dangerous walkway.’By 2001, the trail was closed, riddled with holes, crumbling cement, and gaps where entire sections were missing. Luckily for thrill seekers, El Caminito del Rey is no longer off limits. In 2015, after extensive renovations, one of Spain’s most beautiful (and thrilling) hikes is again king-worthy, and open for all.

Aerial view of colorful boats in the Mediterranean Sea in Ölüdeniz, Turkey

For Wyoming Statehood Day, this is Fremont Peak in the Bridger Wilderness of Bridger-Teton National Forest, Wyoming