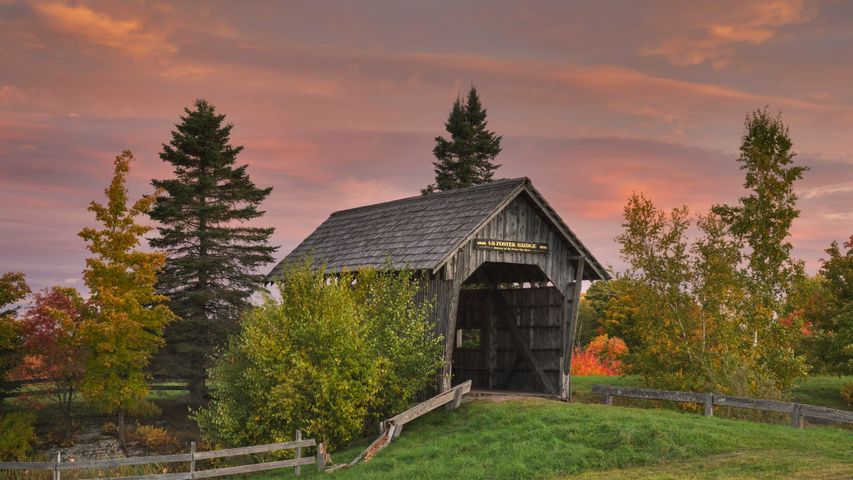 At one point in history, the United States had upwards of 14,000 wooden covered bridges. Most of them were built between 1825 and 1875 to cross a stream or river and were intended to withstand the elements. An uncovered wooden bridge may have a lifespan of only about 20 years while a covered bridge could stand for more than 100. Even still, they don’t fare well without upkeep, and restoration costs can be high. Iron replaced wood as the preferred and cheaper bridge-building material in the mid-1800s. These days, fewer than 900 of the original wooden covered bridges are believed to still be standing. Vermont currently has 104 of them, the highest density of remaining covered bridges in the country. The Alonzo Merrill Foster covered bridge seen in today’s photo can be found in Cabot, Vermont.

The A.M. Foster bridge, named after the inventor of a type of maple spout, is located on Spaulding Farm. Don’t be deceived, the Foster bridge is actually a 1990’s replica of a ‘farm bridge’ that was built in 1890 and known as the Orton Bridge. Despite being a replica, the Foster bridge was authentically constructed by hand, in collaboration with Foster’s great-grandson, with spruce lumber and salvaged granite. Spanning 45 feet across a man-made pond and literally bridging the gap between two farms, it took less than 6 weeks to complete. Unfortunately, it was found to be too narrow for modern farm equipment, a miscalculation that its constructors found amusing. Still, it works well as a photo opportunity and a frequent venue for weddings.