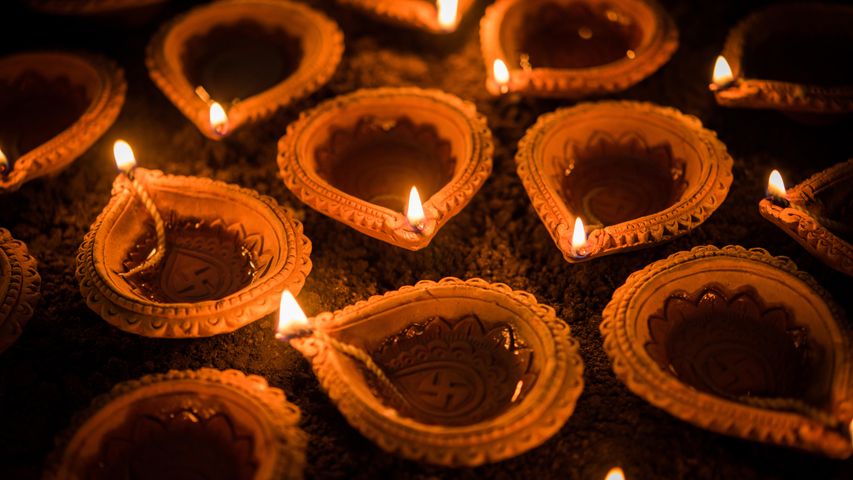 Oil lamps on the occasion of Diwali

Diwali or Deepavali is one of the biggest and auspicious festivals celebrated by Hindus all around the globe. The festival of lights signifies peace and joy, the victory of good over evil, light over darkness. During the festival, people clean their homes, decorate every corner with flowers and rangolis, and light oil lamps (called diyas). Families also perform Lakshmi Puja and pray to the Goddess of wealth to bless them with health, wealth, and prosperity.

According to the Hindu epic Ramayana, Diwali marks the return of Lord Rama, his wife Sita and brother Lakshmana to Ayodhya after spending 14 years in exile and defeating the demon king Ravana. Over the centuries, Diwali has become a national festival that's also enjoyed by non-Hindu communities. For instance, in Jainism, Diwali marks the nirvana (spiritual awakening) of Lord Mahavira on October 15, 527 BC; in Sikhism, it honours the day that Guru Hargobind, the sixth Sikh Guru, was freed from imprisonment. Buddhists in India celebrate Diwali as well.

Diyas are lit in homes, temples, and markets, and you’ll spot hanging lanterns illuminating just about any public space. The warm, bright glow emitted from diyas is considered auspicious – it represents enlightenment, prosperity, knowledge and wisdom. Giving the festival its true meaning – lights!