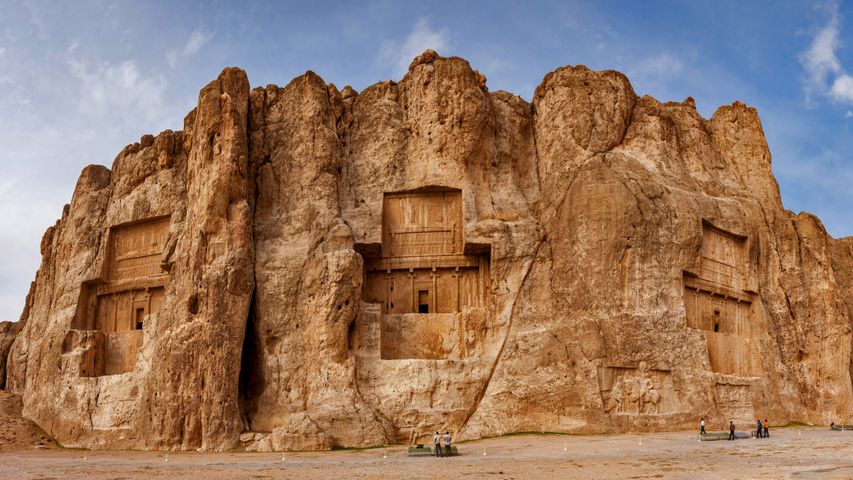 Naqsh-e Rustam (also referred to as Rostam) is an ancient necropolis carved into the mountains of southwestern Iran, offering an insight into one of the earliest civilizations to flourish in ancient Persia. The tombs of four Achaemenid kings (you can see three of them here) are marked by rock reliefs carved high above the ground into the cliff face. This site and the area around it are of huge significance to the history of Iran and its people. They’re also an example of the role archaeology plays in understanding our past.

A necropolis is a complex of tombs and burial plots, literally translated as a “city of the dead”. This one is close to the city of Shiraz in Fars Province. One of the tombs is identified by an inscription as being the resting place of Darius I, aka Darius the Great, and the others are believed to be the tombs of Darius’ son, Xerxes I, Artaxerxes I and Darius II, leaders during the Achaemenid dynasty from 522-330 BCE. Naqsh-e Rustam is also home to relief carvings depicting kings of the later Sassanian Empire, the last Iranian empire before the Muslim conquests of the 7th and 8th centuries. Only a few hundred metres away is the archaeological site known as Naqsh-e Rajab, with more rock carvings depicting three Sassanid kings and a high priest. While these civilizations have faded, what they created endures as a permanent record of human history.