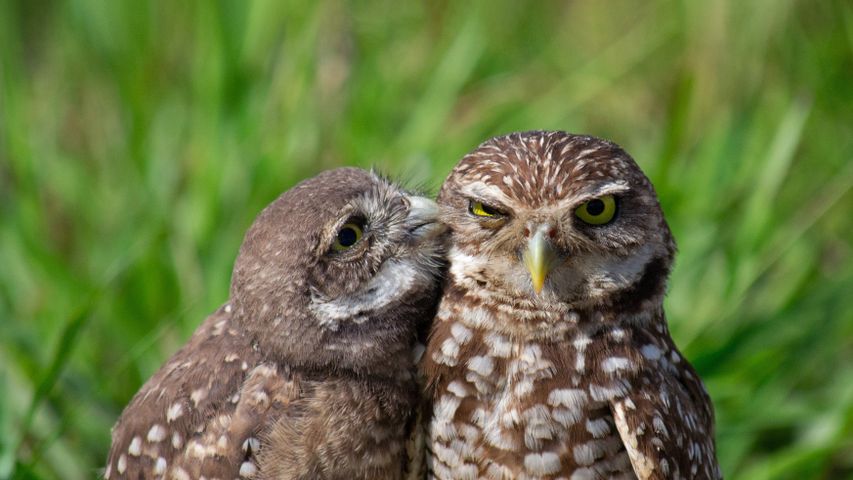 Forget looking up in the trees to find these guys. They are burrowing owls, which means that they live on the ground or under it. In fact, they often take advantage of the hard work of tunnelers such as prairie dogs or gophers by building their nests in the burrows they dug and abandoned. Think of burrowing owls as squatters of the avian world. You'll find these 7½- to 11-inch birds in North and South America, especially in grasslands, farming areas, or dry expanses with vegetation that is close to the ground.

Another of their behaviors is most unowl-like, too: While most owl species are nocturnal, burrowing owls prefer to be out and about during the day snagging bugs (except when they shelter from extreme midday heat). But they do hunt for small mammals at night using the tactical advantages of their superior hearing and night vision. They hunt by air and by land, swooping down from branches but also using their long legs to hop along the ground to catch critters, just to keep them on their toes.

In their downtime, burrowing owls snooze at the mouth of their burrows or in hollows in the ground, which do double duty as a dirt bath. If they're startled, the owls do a cartoonish bounce, then run to the safety of their burrows, uttering screams and clucks to scare off the intruder. They even mimic rattlesnake sounds to send their foes packing. These quirky birds also reject the traditional owl 'woo-who' in favor of 'coo-coooo' and the nighttime 'co-hoo.' Talk about owls of a different feather…

The Dubai Fountain in Burj Lake, taken from the Burj Khalifa in Dubai, United Arab Emirates