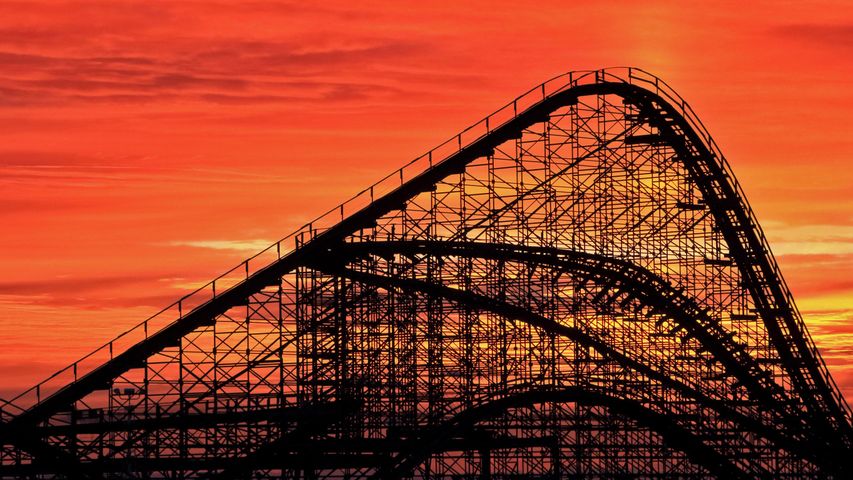 To really get the feel for today's photo, stop what you're doing, put your hands in the air, and imagine yourself plunging downhill at 50 miles an hour. Screaming is optional. It's National Roller Coaster Day and we're waiting in line at Morey's Piers in Wildwood, New Jersey, for our ride on the Great White. A hybrid wooden and steel coaster, it's been in operation since 1996 and reaches its highest point 110 feet above the ground. Coaster enthusiasts point out the ride's dip under the pier shortly after the start as one of its highlights. It's also noted for a portion of the ride swinging out over the nearby beach.

Roller coasters have come a long way since their early days beginning in the 17th century as Russian sled rides. Eventually called Russian Mountains, those original rides were just tall, wooden ramps covered in ice. When the concept made its way to the much warmer France, the sleds rolled across the tracks on wooden rollers, hence the name 'roller coaster.' Coasters saw another advancement in the 1870s when a Pennsylvania mining company built a downhill gravity railroad to transport coal. Its train cars held double duty by giving thrill rides to tourists during down time.

By the 1920s, coasters had entered their 'golden age.' New construction techniques allowed designers to build them taller, longer, and faster, drawing crowds to newly opened amusement parks around the world. These days, the United States alone has about 760 roller coasters, and thrill seekers take them on roughly 1.7 billion rides per year. Aieeeeee!