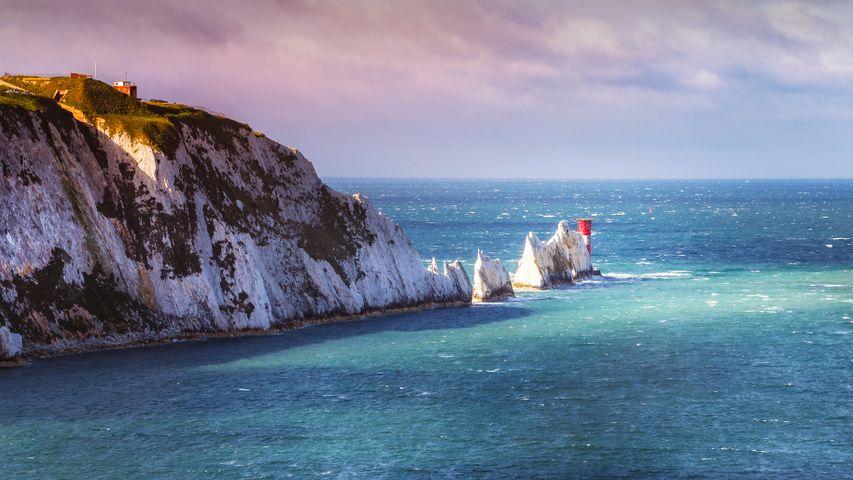 These sun-kissed sea stacks are The Needles on the Isle of Wight, part of a ridge of chalk hills which, during the last Ice Age, is thought to have stretched across the Solent to Old Harry Rocks on the Isle of Purbeck. Melting ice then released a deluge of water which flooded land and wore away the chalk ridge, severing the Isle Wight from the mainland and leaving behind rock formations on either side of the gap. Today’s three remaining stacks are named after a fourth, needle-shaped rocky pinnacle known as Lot’s Wife, which collapsed into the sea during a storm in 1764.

Its stump is still visible at low tide, forming a dangerous reef – one of several obstacles for sailors. The tip of the Isle of Wight is exposed to harsh weather, a weather station often records the strongest winds in Britain, and many ships have run into trouble at this protected wreck site. The remains of two warships have been discovered here. The HMS Pomone sunk here in 1811, while hurrying back to England with intelligence for Westminster, as did The Assurance, which was lost in 1753, while returning to Portsmouth from Jamaica.

At the end of the sea stacks sits The Needles Lighthouse, now automated, which has been warning ships off dangerous rocks here since 1859. At the top of the image is The Needles Old Battery, a Grade II-listed Victorian fort built in 1862, which saw service during both World Wars. There’s lots to see on the Isle of Wight, be it stunning natural scenery or historic sites. And this week, it throws its famous Garlic Festival, to support the island’s garlic industry and celebrate the pungent bulb, as well as providing good food, live music and family activities.

On Rollercoaster Day, we're at Skyline Park in Bavaria, Germany