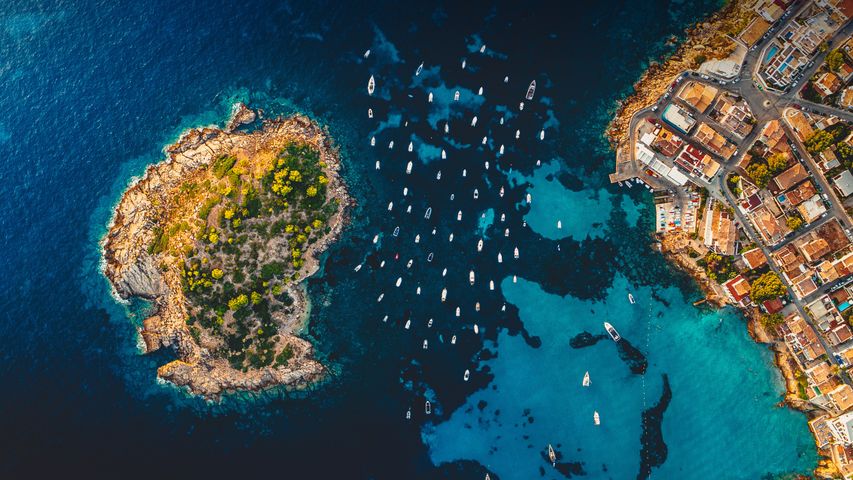 There isn't much to the tiny island of El Pantaleu (or Es Pantaleu in Catalan), cast off the westernmost shore of Mallorca, itself an island only about 60 miles across. Pantaleu and Mallorca are part of the archipelago of Balearic Islands in the Balearic Sea, off the east coast of Spain. Mallorca, Ibiza, Menorca, and Formentera are the chain's four major islands, famous as destinations for tourists seeking the warm Mediterranean climate and inviting shoreline.

Pantaleu is more precisely an islet, a mere rock about 6 acres in size. Its highest point is 80 feet. Not much grows on El Pantaleu, and no one lives on it. Mallorca is only about 1,000 feet away, making it a vigorous but doable swim for the many who have tried from the beach at the village of Sant Elm. Technically, no one is allowed to set foot onto Pantaleu, because it is designated a nature reserve along with the much larger Dragonera Island a few miles farther to the west.

Pantaleu is most useful as a windbreak for boats, as you can see from this aerial photo. The notch between the islet and the main island is a popular anchorage for the many pleasure boats that cruise these waters. Even centuries ago, sailors understood the value of Pantaleu. In 1229, the young James I the Conqueror, King of Aragon, sheltered his fleet from a storm behind Pantaleu before invading the Balearics to make good on his nickname. These days, most of the turf wars around here have been settled, although you might have to battle a vacationer for a spot on the sand or a table at happy hour.