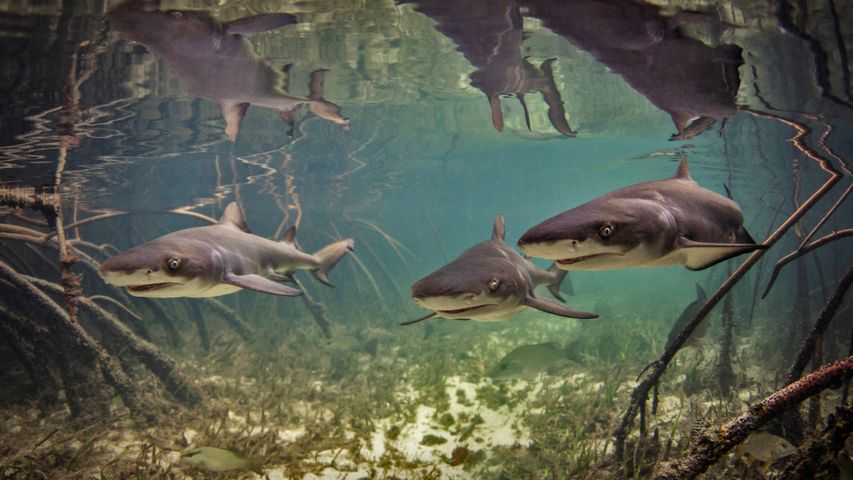 For Shark Awareness Day, let’s consider things from the shark’s point of view. Sharks get a bad rap. They may be apex predators of the oceans, but we’re the ones most responsible for reducing their populations by more than 70% in the past half-century. Rather than perpetuate the stereotype of sharks being dangerous, let’s think of them as they are – amazing sea creatures with hundreds of millions of years of history in their genes. We may not always want to encounter them face to face, but they deserve our respect and for the health of our oceans as a whole, sharks deserve protection.

Take these baby lemon sharks, for example. They’re just hanging out in some mangroves off the Bimini Islands of the Bahamas. They’re considered the best known of all shark populations because of research done at the Bimini Biological Field Station. But as well-studied as they are, lemon sharks tend to avoid us. There have only been 10 reports of lemon sharks biting humans, and none of these bites were life-threatening. Notice these babies are sticking by each other’s sides. Like many species of shark, lemon sharks prefer to be close-knit with one another. Social interaction is important to them, just as it is for humans. It helps them learn, cooperate, and survive. Sadly, humans have overfished the lemon shark, mostly for food, putting it on the list of vulnerable species. So, rather than live in fear of sharks, for today, (and hopefully longer,) let’s change the narrative to giving them a little space to live in peace.