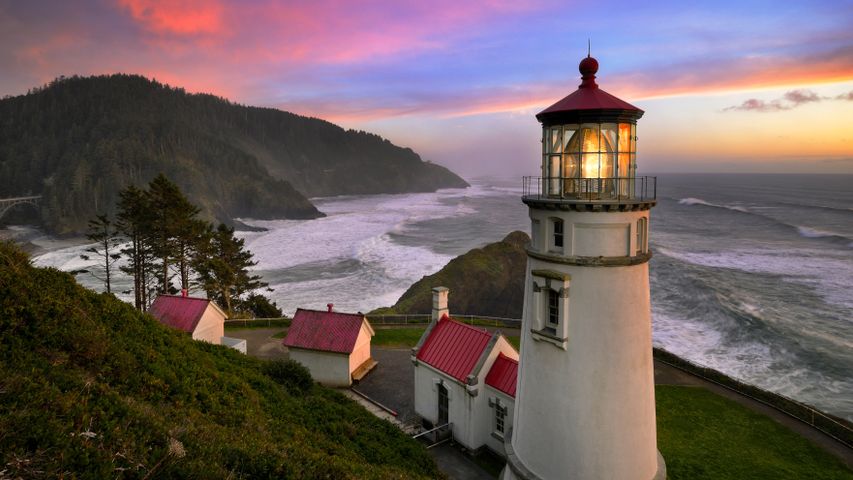 Heceta Head Light is perched 62 metres above the Pacific Ocean on Oregon’s central coast. The headland is named for Spanish Basque explorer Don Bruno de Heceta, who led a secret expedition in 1775 to bolster Spain’s claim to the Pacific Coast of North America. Having sailed from Mexico, by the time the voyage reached these shores, the crew was ravaged by scurvy and Heceta made the call to turn back—but not before he became the first to map and record a written description of the mouth of the Columbia River as well as this rocky 304-metre-high headland that would eventually bear his name. By the 19th century, seafarers making their way up and down the coast made the call for a lighthouse to guide their way. Construction of the 17-metre-tall lighthouse was complicated by the steep bluffs and remote location, but the first light beam pierced through the darkness on March 30, 1894.

The first lightkeepers at Heceta Head found the location too isolated, prompting several of them to leave the job after just a short period. Staffing turnover persisted until the 1930’s when nearby Oregon Coast Highway was put into service and the area received electricity. The lighthouse played a minor role in World War II when 75 members of the Coast Guard and their dogs were stationed here to guard the beaches. The lighthouse became fully automated in 1963, and by 1970 the lightkeeper’s house entered a new era as a satellite campus for a nearby community college. These days the area is on America's National Registry of Historic Places and the lightkeeper’s cottages have a new life as rooms of a bed and breakfast.