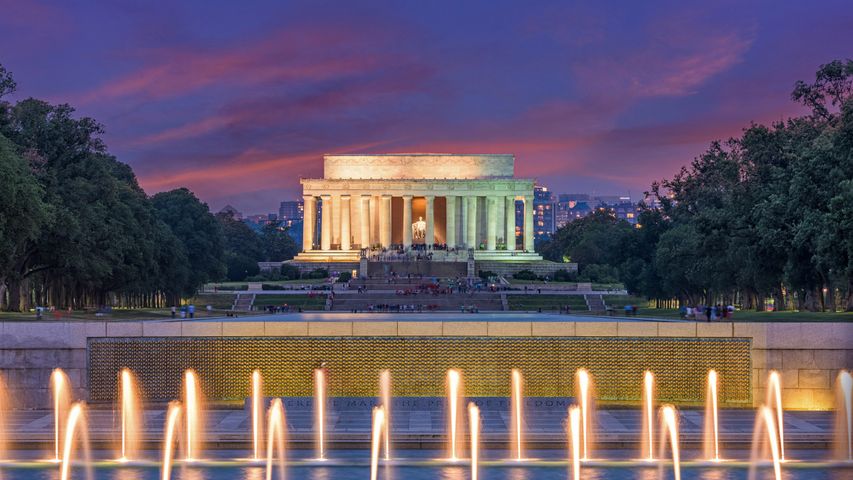 A day of remembrance. Memorial Day

Today, on Memorial Day, many will no doubt stand before this fountain on the National Mall in Washington, DC. Dedicated 18 years ago as our national World War II Memorial, it's become one of the most popular sites in the nation's capital, and now receives more than 4 million visitors each year. To the west, toward the setting sun, is the Reflecting Pool and the Lincoln Memorial. To the east, unseen here, is the Washington Monument.

The World War II Memorial is steeped in meaning and tells the story of the armed conflicts in both the Atlantic and Pacific. On the north side of the oval fountain and plaza, images cast in bronze tell the story of the battle against the Axis powers in Europe. Other bronze bas-reliefs on the south of the fountain depict the battle for the Pacific. The images also draw a link between the battlefront and the home front with images of troops in Europe and the Pacific interspersed with those of farmers and factory workers in the US. Statements made by leaders of the time are etched onto the walls of the memorial, as are names of famous battles.

At opposite ends of the fountain are 56 pillars arranged in two semicircles, representing the 48 states and six US territories (at the time of the war). But perhaps the most poignant feature of the memorial is the field of gold stars, in the center of today's photo, as you look west toward the Lincoln Memorial. Each of the 4,048 stars represents 100 Americans who died in the war. Below the field of stars are inscribed the words, "HERE WE MARK THE PRICE OF FREEDOM."

Guard at the Tomb of the Unknowns, Arlington National Cemetery, Virginia