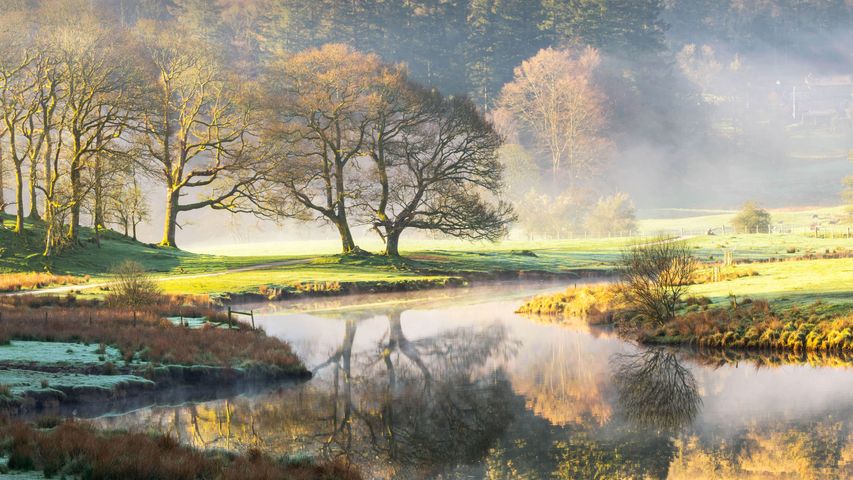 Reflecting the beauty of the Lakes. River Brathay, Lake District

This pretty spot on the River Brathay in Cumbria is popular with photographers and painters, thanks to the oak trees on the riverbank, reflected in the water. The river takes its name from the Old Norse for broad river and flows out of Langdale, the U-shaped glacial valley at the heart of the Lake District.

It’s not always this serene. At one point the river flows 1,289ft (393m) above sea level before dropping 930ft (283m) over two miles. It crashes over the Colwith Force waterfall before flowing into the tarn - small lake - of Elterwater. Further downstream it is thrust through a narrow gap at Skelwith Force, creating another impressive waterfall. This spot on our homepage is close to Elterwater and sits in the shadow of the craggy Langdale Pikes, said to be the most recognisable mountains in the national park. This little scene looks good all year round, be it bathed in sunlight, shrouded in autumnal mists or covered in frost – but it is particularly attractive at sunrise.

The Lake District, England’s largest national park at 912 sq miles, is well known for its picturesque bodies of water, reflecting surrounding mountains. It is home to England’s highest mountain, Scafell Pike, at 3,210ft (978m) and England’s longest lake, Windermere, which is 10.5 miles long, but there are peaks and tarns, lakes and meres of all sizes to enjoy. This particular spot offers easy walking and a cycle route alongside the river, for those who prefer an amble to a hike.