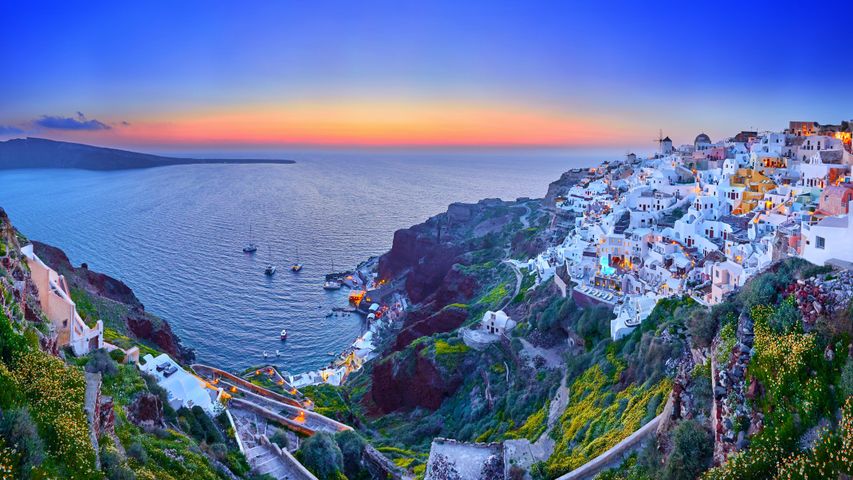 The ancient home of the Minoans. Santorini, Greece

Officially known as Thira, Santorini is perhaps the most famous of all the Greek Islands. Located at the southern end of the Aegean Sea, Santorini is part of the Cyclades group of islands and receives about two million visitors a year. That’s a lot of adoring attention for a small island (only 75 square kilometres) of 15,000 residents, and it’s no wonder why. The whitewashed, clifftop villages of Santorini, like Oia featured in this image, are postcard perfect. And so are the unlimited panoramic views of the azure Mediterranean Sea.

Its tranquil beauty belies the cataclysmic eruption that formed the island as we know it today. The Minoan eruption, about 3,600 years ago, was one of the world’s largest known volcanic eruptions. It destroyed what was a thriving Minoan city and created a giant caldera that sank below the sea, leaving behind the picturesque lagoon seen here. Volcanic activity has continued since then. At the centre of the lagoon is the uninhabited volcanic island of Nea Kameni, which emerged from the sea in 19 CE, according to Pliny the Elder. It's had several major eruptions over the past 300 years.

With millennia of experience, people have learned to live with the volcanic activity of these islands. Tourism is now the main activity on Santorini, along with a small winemaking industry. Throw in abundant sunshine, constant sea breezes, and meandering steps through storybook villages and you’ll never run out of reasons to visit.