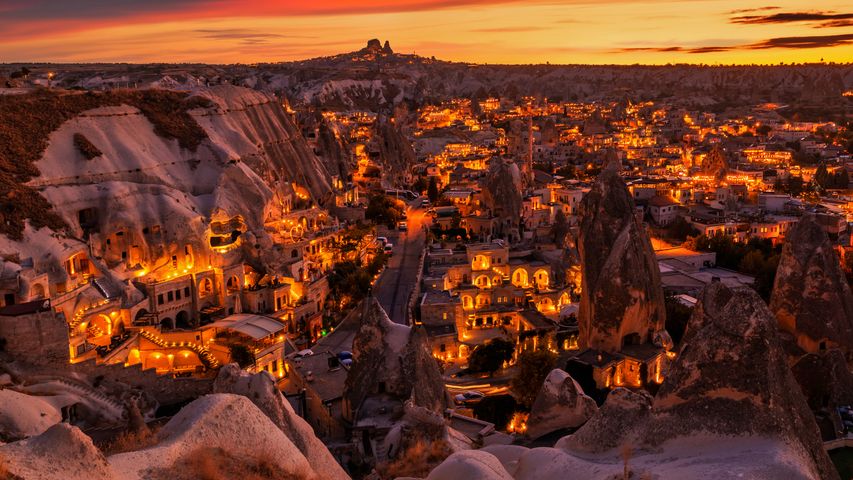 Both natural wonders and historic landmarks, the ‘fairy chimneys’ of Göreme may suggest the fantastical dwellings of an alien species, or an illustration from a Dr. Seuss book. These and similar rock formations are known by many names—hoodoos, tent rocks, earth pyramids, as well as fairy chimneys—and are typically found in dry, hot areas. Here in Cappadocia, in south-central Turkey, they were formed when a thick layer of volcanic ash solidified over millions of years into soft, porous rock called tuff that was overlaid by hard basalt. Cracks in the basalt allowed wind and rain to gradually wash away the softer bottom layer, leaving the hard basalt to cap tall columns of the tuff. The result is these unusual, often beautiful—and perhaps puzzling—formations that spread across the Anatolian plain.

This part of modern day Turkey has been inhabited since at least the Hittite era, between 1800 and 1200 BCE, and possibly for much longer. Innumerable ancient empires fought over the region, with Hittites, Assyrians, Neo-Assyrians, Persians, Greeks, and Romans each laying claim to Anatolia at times. To escape this dangerous world, the locals learned to burrow into the hillsides for protection. Today, a visitor can see the vast, complex, interconnected caves in which societies thrived and sheltered for millennia. Göreme National Park was added to the UNESCO World Heritage List in 1985 and is now a popular tourist destination.