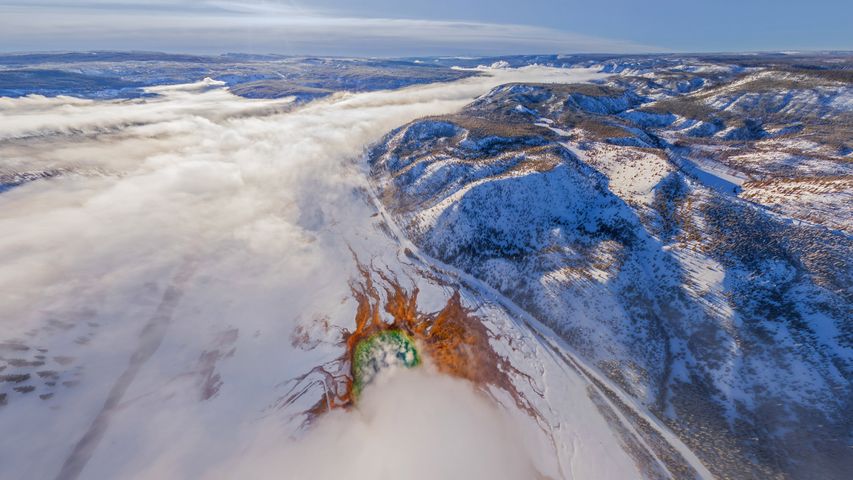 Only a very small percentage of Yellowstone’s total visitors see the park when it looks like this. In winter, when the park grows quiet, its hydrothermal features really stand out, like the rainbow-hued Grand Prismatic Spring near the centre of this image, the most photographed feature in Yellowstone.

Yellowstone was established by the US Congress 150 years ago as the nation’s first national park. Today, there are 63, and they include the volcanoes of Hawaii, the giant sequoias of California, the Grand Canyon, and the desolate moonscape of the Badlands.

Perhaps no national park better captures the American landscape than Yellowstone, 3,500 square miles of lakes, canyons, rivers, mountains, waterfalls, hot springs, and its charismatic megafauna – bison, wolves, elk, and grizzly bears. But it’s Yellowstone’s hydrothermal sites that really set it apart. Old Faithful might be the most famous, but it’s only one of 10,000 around here. Although the park is still chilly in April, you’ll have the place mostly to yourselves. Only about 44,000 visit Yellowstone in April, compared to the nearly 1 million who gather each July.

Sunset over the Wheaton River as the light hits Grey Ridge near Whitehorse, Yukon, Canada