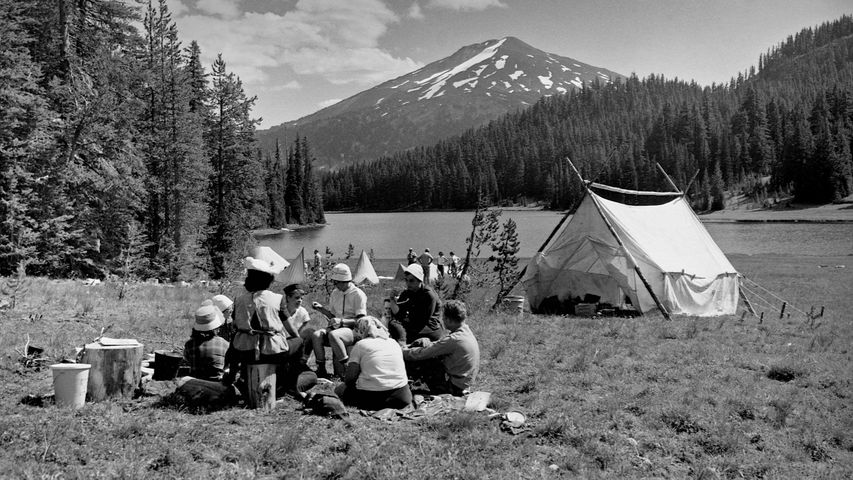 Today we're celebrating 110 years of the Girl Scouts! Sure, we enjoy their cookies every year, but with so much history behind the organization, the Girl Scouts deserve merit badges for more than just the Thin Mint. On March 12, 1912, founder Juliette Gordon Low brought an outfit called the Girl Guides stateside from England after befriending the founder of the scouting movement there. The first American troop had 18 girls participating. Low designed activities to allow girls to serve their communities, experience the outdoors, and develop self-reliance and resourcefulness. Those skills would be useful on the camping expedition seen in today's photo. These girls can be seen along the shore of Todd Lake at the Deschutes National Forest in Oregon in 1960.

Officially renamed Girl Scouts of the United States of America in 1913, the organization had a hand in relief efforts during the Great Depression and World War II. Girl Scouts also have a long history leading events that support civil rights—Martin Luther King called the group 'a force for desegregation.' In recent years, the scouts have focused on environmental and social issues, and have made headlines as transgender allies.

If all that's not enough of a reason to celebrate the Girl Scouts, then, OK, consider the cookies. Girl Scout Cookies have been produced on a commercial scale since 1934, though individual sales have been documented much earlier. Called the largest annual fundraiser in the world dedicated to girls, every year more than 1 million scouts sell over 200 million packages of cookies, raising more than $800 million. The Thin Mints variety amounts to 25% of all sales. We'll raise a glass of milk to the Girl Scouts today as we sample our favorite cookies.