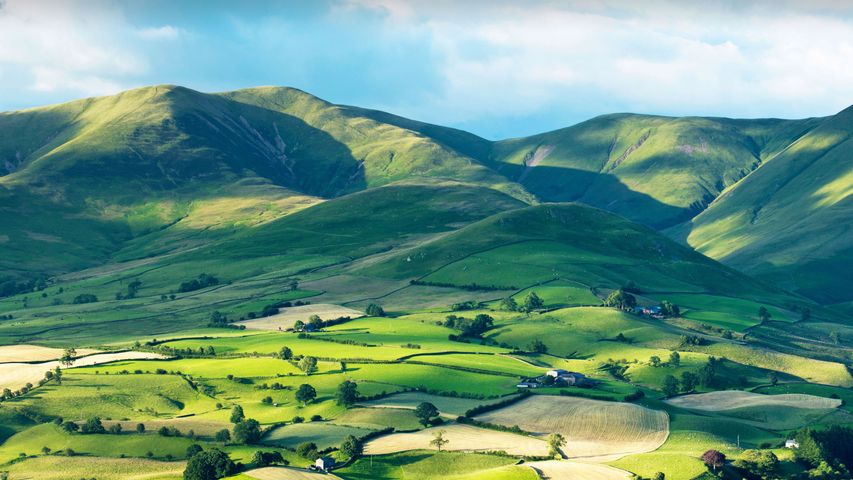 Between the Lakes and the Dales

Nestled between the Yorkshire Dales and the Lake District in northern England, the smooth rounded shapes and steep gills (ravines) of the Howgill Fells capture an eye-catching pattern of light and shade. These ancient hills, formed more than 400 million years ago, have remained a largely settlement-free zone, uncrossed by roads and untouched by development. Trees are scarce on the high ground, where sheep and wild ponies graze and small streams tumble down dark, narrow gullies. At Cautley Spout, said to be England’s highest cascading waterfall, water crashes down 650ft (198m), and can be seen from miles away. The panoramic views from the fells are a sight worth climbing for. The highest point is the top of The Calf, at 2,218ft (676m), from where hikers can enjoy a 20-mile skyline of the Lakeland peaks, the Yorkshire Three Peaks, and the nearer Howgill peaks. Part of the range sits within Yorkshire Dales National Park, although they are in the county of Cumbria.

The Howgill Fells’ striking appearance was perhaps best summed up by the famed book author A. Wainwright as “sleek and smooth, looking from a distance like velvet curtains in sunlight, like silken drapes at sunset… a remarkable concentration of summits often likened to a huddle of squatting elephants”.