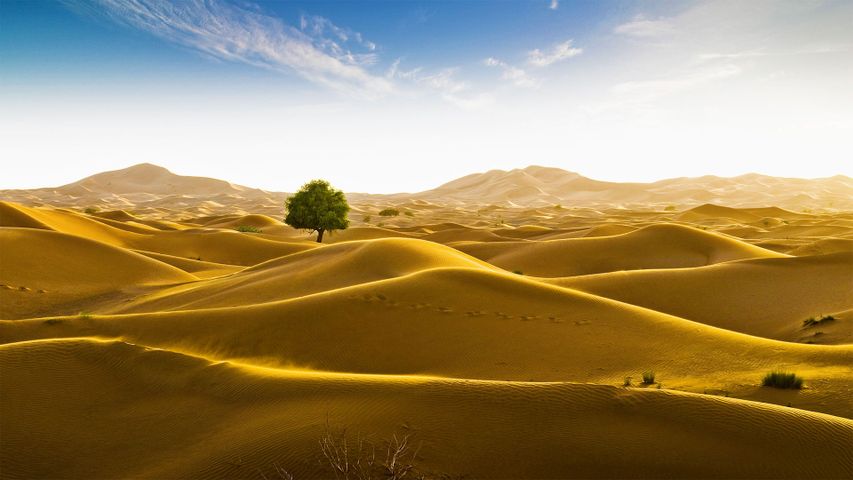 Signs of life in the Empty Quarter

An unlikely tree stands amid the seemingly endless dunes of the Rub' al Khali desert in the Arabian Peninsula. The Rub' al Khali, meaning Empty Quarter, is a vast sea of sand. Spreading across 250,000 square miles, it's the largest contiguous sand desert in the world, covering most of south-east Saudi Arabia, with smaller portions in Yemen, Oman and the United Arab Emirates. One of the driest places on Earth, almost nobody lives in Rub' al Khali, and much of the desert remains unexplored. Some of the dunes tower more than 800ft (244m) high, and the depressions in between, called sabkhas, can be so soft that vehicles, camels and people can easily become stuck.

The Rub' al Khali wasn't always so forbiddingly dry. At various times between 2,000 and 6,000 years ago, cataclysmic rainfall, like modern-day monsoons, formed shallow lakes in the spaces between the dunes. Most of these lakes were temporary, but some lasted hundreds of years and supported a variety of plants and animals, even large creatures like hippopotamuses, water buffalo, and long-horned cattle. Rain isn't unheard of today, either. In May 2018, Cyclone Mekunu brought enough rain to form lakes in the Rub' al Khali for the first time in about 20 years - a rare occasion when the Empty Quarter wasn't looking so empty after all.