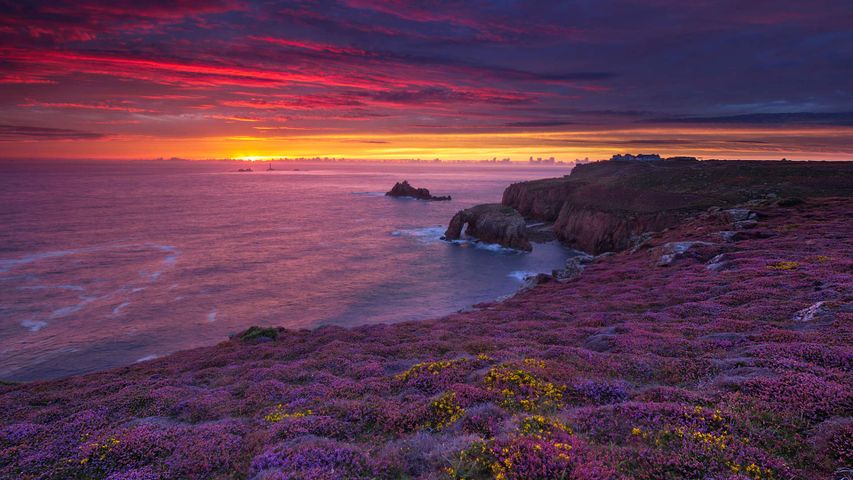 The sun sets in the West

Welcome to Land’s End, mainland England’s most westerly point whose beauty and legends have fascinated visitors for centuries. In ancient times it was called Belerion, the shining land, and somewhere between this point and the Isles of Scilly, the mythical Lost Land of Lyonesse is said to lie, submerged beneath the waves. The 200ft high (60m) granite cliffs are an excellent spot to look out over the Celtic Sea for ghostly ships (more than 130 shipwrecks have been recorded off the coast here), or marine wildlife, including seals, dolphins and huge basking sharks which trawl for plankton on their summer journey up Britain’s west coast.

That arch is the iconic Enys Dodman rock formation – one of many rocky arches, sea stacks and tiny islands separated from the mainland by the elements. Look inland and you will find a coastal landscape covered in wildflowers and lichen, from heather to sea campion and wild thyme. Millions of people have had their picture taken under the famous signpost here, pointing to John O’Groats 874 miles north-east and New York, 3,147 miles west across the Atlantic, or have stopped off at the famous First and Last House.

It’s not Britain’s most westerly point (that goes to Corrachadh Mòr in the West Highlands) or even the most southerly point on the mainland (that goes to nearby Lizard Point). But Land’s End famous role as the starting point, or terminus, of many end-to-end charitable walks and races ensures its position as one of the UK’s best-known landmarks.