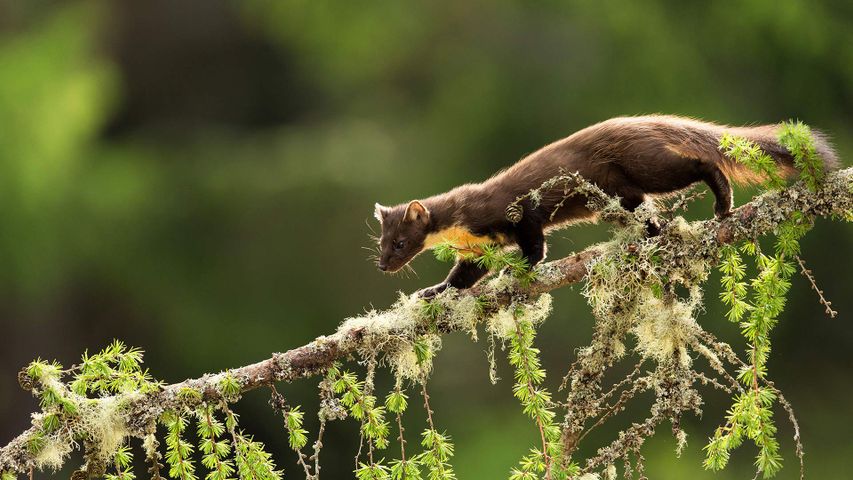 Out of the woods?

Pine martens, like this one in Perthshire, are rarely sighted during the day in Great Britain, if at all. Thousands of years ago, this shy, largely nocturnal creature was our second most common carnivore. But its numbers nosedived as once-plentiful woodland was lost, it was shot for sport and persecuted by Victorian gamekeepers.

By World War One it was on the brink of extinction here. Largely wiped out in England and Wales, the pine marten clung on in Scotland and, thanks to conservation efforts and legal protection for the species, is making a dramatic comeback there, as well as being reintroduced in England and Wales. Some research suggests its return could benefit another endangered British native, the red squirrel. Pine martens eat both red and grey squirrels but appear to have more luck catching the greys, whose presence edges out the smaller reds.

While it may look similar to other mustelids like weasels and stoats, the pine marten is larger and is the most likely to be found up a tree. Agile, with semi-retractable claws, strong forelimbs and a long bushy tail which helps it to balance - it can twist like a cat in mid-air to land on its feet. A stealthy hunter, it eats small mammals but will also scavenge eggs, fruit and berries. Spotting them can be tricky, they are solitary creatures, mostly active at night - apart from during the summer mating season when you may hear their shrill, cat-like calls in the woods.

The Hive in the Royal Botanic Gardens at Kew, south-west London