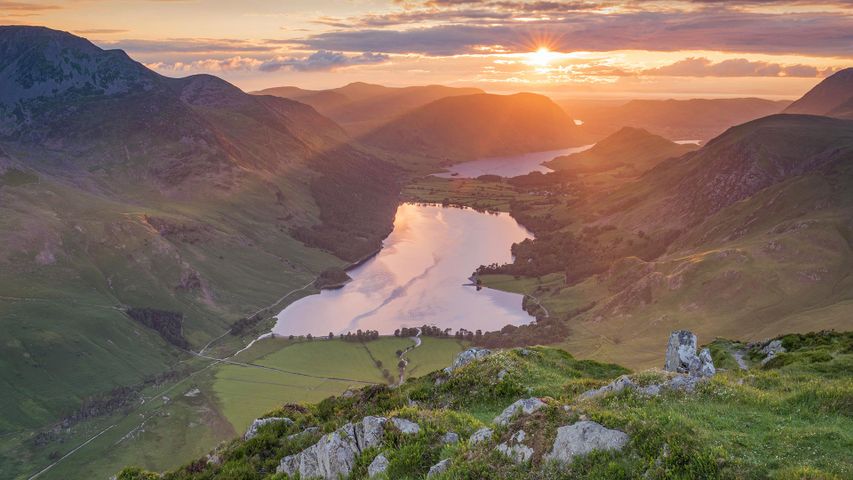 Celebrating 70 years of the Lakes

This serene sunset comes to us from the Lake District, England’s largest national park, designated 70 years ago on 9 May 1951. Appreciation of the beauty of the Lakes, once thought of as a wild and desolate place, had been growing steadily since the late 18th Century, later boosted by the writings of the Lake Poets, Wordsworth, Southey and Coleridge. Day trips out of cities were made easier by new railways and later roads and visitor numbers swelled. Tourism remains hugely important to the economy of the area to this day.

The lake in this picture is Buttermere, a name probably derived from the Old English for ‘the lake by the dairy pastures’, due to the fertile valley it sits in. Of the 16 largest bodies of water in the Lakes, only one - Bassenthwaite - is actually called a lake, the other lakes are all named ‘waters’ or ‘meres’ instead. The Lake District’s unique landscape has been moulded over millions of years by tectonic and glacial movement, and later by human activity including farming, quarrying and mining. It was made a Unesco World Heritage Site in 2017 and continues to draw visitors from around the world, thanks to a harmonious landscape in which mountains are mirrored in lakes.

Cat Bells fell above Derwentwater in the Lake District, Cumbria