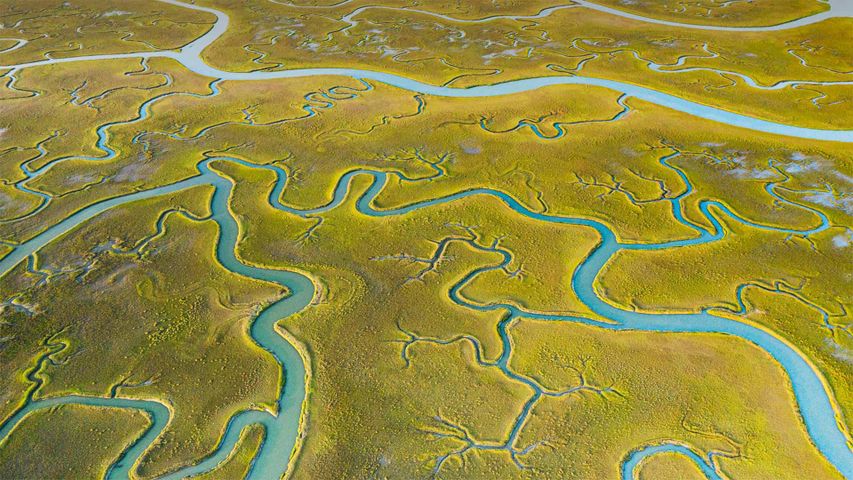 When does the tide come in?

From the air, this tract of Mockhorn Island on the Atlantic coast of Virginia’s Eastern Shore could pass for gentle farmland. But what you're really looking at is rugged tidal marshland, visible when the tide is out — the rest of the time, much of this area is underwater. Mockhorn is itself part of Virginia's coastal island chain called the Barrier Islands, which runs down the east coast of the state from the Maryland-Delaware border for about 70 miles (112 kilometres), stretching to the mouth of Chesapeake Bay. The green vegetation you see is grass, although not the kind you'll find in a suburban lawn. Instead, it's saltmarsh cordgrass, a type of perennial deciduous species that grows in wetlands and salt marshes like this one.

The only way to access the tidal channels of Mockhorn Island is by boat, and plenty of kayakers, hunters, and sport fishers are willing to brave the fickle, windy weather to enjoy the island's labyrinth of sloughs, bays, and inlets. The area's also a great destination for bird watchers, as many bird species fly directly overhead while migrating. Historically, the rugged terrain and remote location of the Barrier Islands made them a great place for those running from the authorities — it's said that pirates, including Blackbeard himself, spent time hiding in the backwaters of this rugged coast.

A tractor kicks up dust while tilling fields on the Palouse near Pullman, Washington, USA