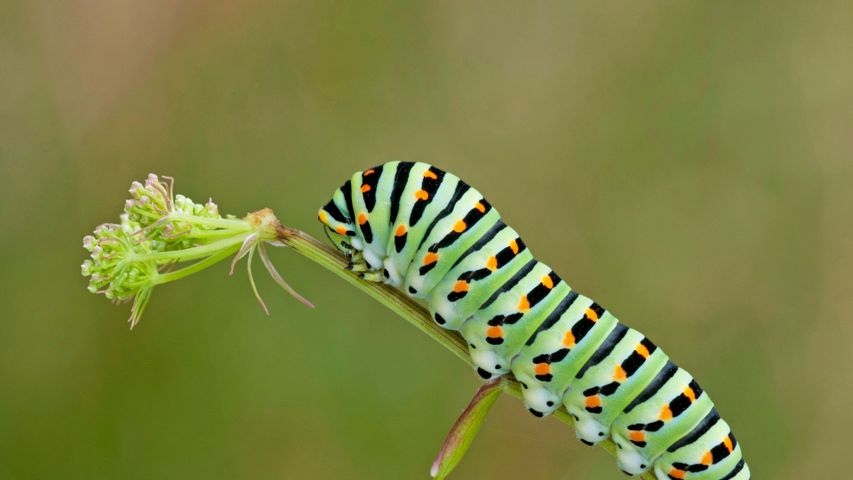 This swallowtail caterpillar, steadily chomping its way through milk-parsley, could have crawled out of the pages of the classic children’s book The Very Hungry Caterpillar. First published in 1969, Eric Carle's book has sold nearly 50 million copies since and remains popular with children worldwide.

Why are we talking books? Well, today is World Book Day in the UK and Ireland, a day dedicated to encouraging children to read. In normal years, it’s also often a day for dress-up, with children wearing costumes of their favourite book characters. While many schoolchildren are still studying at home for now, virtual World Book Day activities are being held to inspire a love of reading. And of course, there’s nothing to stop you getting dressed up regardless - be it as a Harry Potter character, the Worst Witch or a peckish caterpillar.

About that colourful papilio machaon, or Old World swallowtail caterpillar, on our homepage. It will eventually become one of our largest, and rarest, native butterflies. The British version, papilio machaon Britannicus, is only found on the fens of the Norfolk Broads where its food of choice, milk-parsley, grows. Its larger continental cousin, the papilio machaon gorganus, is less fussy about its food and has been spotted in its butterfly form in other areas including the Isle of Wight, Dorset, Hampshire and Sussex. The swallowtail can be spotted on the wing over the Broads from late May to early June.

Loup of Fintry waterfall on the River Endrick, Scotland