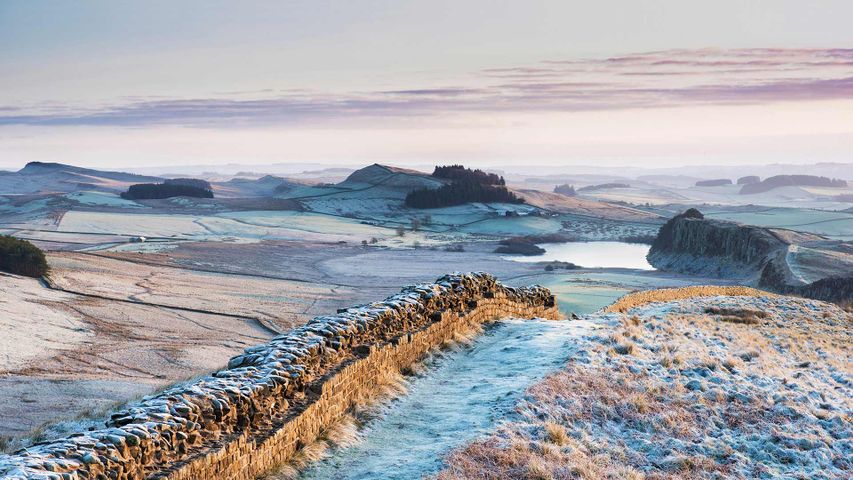 Edge of an empire

Welcome to Winshields Crag in England’s most northerly county, Northumberland. This frosty scene shows the highest point on Hadrian’s Wall, a physical reminder of a long-gone superpower. Running 73 miles (117km) across northern Britain from the north-east coast to the Irish Sea, this impressive feat of engineering is named after the Roman emperor who commissioned it on a visit to Britain in AD 122, and is said to have been intended to separate the Romans from the “barbarians” (anyone outside their empire).

Whether it was more about frontier control and taxes than repelling raiders is a matter of debate, but for nearly 300 years it marked the north-west frontier of the immense Roman Empire, a frontier which, at its peak, ran for more than 3,100 miles (5,000km). Standing nearly 20ft (6m) high in places and up to 10ft (3m) thick, Hadrian’s Wall took thousands of soldiers about six years to build, across the rugged and challenging landscape of fast rivers, rock and rolling hills in Cumbria and Northumberland.

In normal years this World Heritage Site is a hugely popular tourist destination, attracting people from all over the world to see not just the visible remains of the wall itself, but also the forts, protected gates, turrets and earthworks that came with it - a taste of life on the edge of one of history’s greatest empires.

Verona along the Adige River, Italy