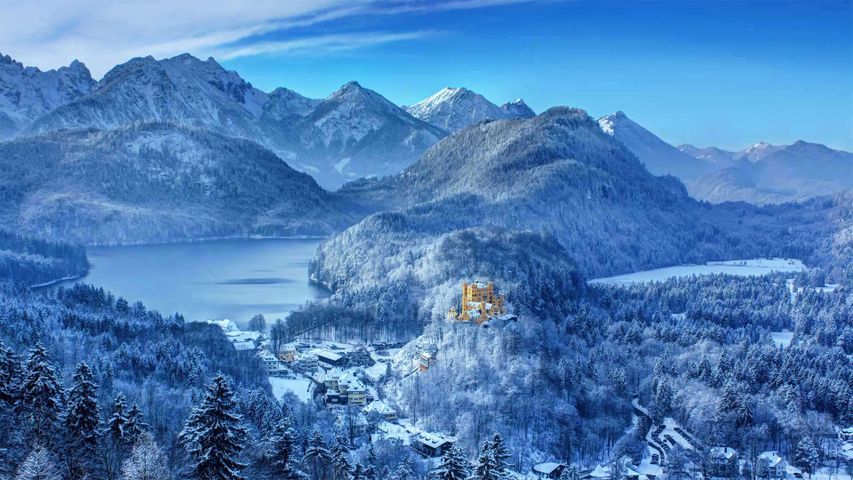 During a walking tour in the spring of 1829, Crown Prince (and future King) Maximilian II of Bavaria fell in love with these forested mountains and Alpine lakes, so three years later he bought the dilapidated remains of a 12th-century castle overlooking the village of Hohenschwangau. The yellow neo-Gothic castle that Maximilian built to replace the earlier ruins became the summer home and hunting retreat for the king, his wife, Marie of Prussia, and their two sons, Ludwig and Otto. Hohenschwangau Castle became a kind of fantasy palace, particularly for the two young princes, who spent their time traipsing through the forest, reciting poetry, and staging scenes from the Romantic operas of Richard Wagner.

After the death of King Maximilian in 1864, Ludwig ascended to the throne and moved into his father's rooms in Hohenschwangau Castle. He ordered that stars be painted onto the bedroom's ceiling and had them illuminated by hidden oil lamps. Ludwig and his successors made few other modifications, so most of the rest of the castle remains unchanged even today—the 19th-century interiors contain period furniture, and preserved on the walls are more than 90 frescoes depicting heroic German folklore and the medieval legends of Wagner's operas.

A ladybug hibernates in Tewin, England

Sauna on Monte Lagazuoi in the Dolomites of Italy