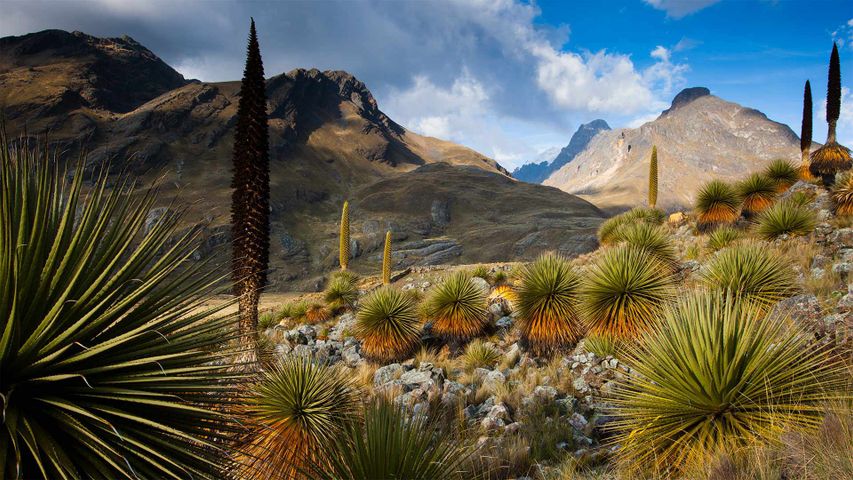 Mountains fit for a queen

Like sentinels standing guard, these towering stalks are flowers of the queen of the Andes, the world's largest bromeliad—some specimens can grow up to 50 feet tall. This extraordinary plant has adapted to grow only in the adverse conditions found on the high slopes of the Bolivian and Peruvian Andes. To see several of them in bloom at once is truly special, for the queen of the Andes sends up her flowering stalk just once, after a century or so of painstaking growth. A single plant will bloom for about three months, producing anywhere from 8,000 to 20,000 flowers, then die.

Because mountains present a variety of altitudes, exposures, and gradients, they host a broad spectrum of climatic zones and ecosystems. The plants in our image are thriving in Peru's Cordillera Blanca (White Range), the highest and most glaciated tropical mountain range in the world. Several peaks in the Cordillera Blanca tower more than 20,000 feet in elevation, making it a world-class climbing destination. Each step up or down in altitude seems to introduce a new ecosystem, with plants and animals that have adapted to each differentiated zone.

Protecting this biodiversity found on mountains is the theme for 2020's International Mountain Day, held each year on December 11. The UN, which founded International Mountain Day, invites us to join the conversation about the importance of mountains. On social media, use the hashtag #MountainsMatter to share about the biodiversity in the mountains near you.

Jomolhari with an ancient dzong in the foreground, Bhutan