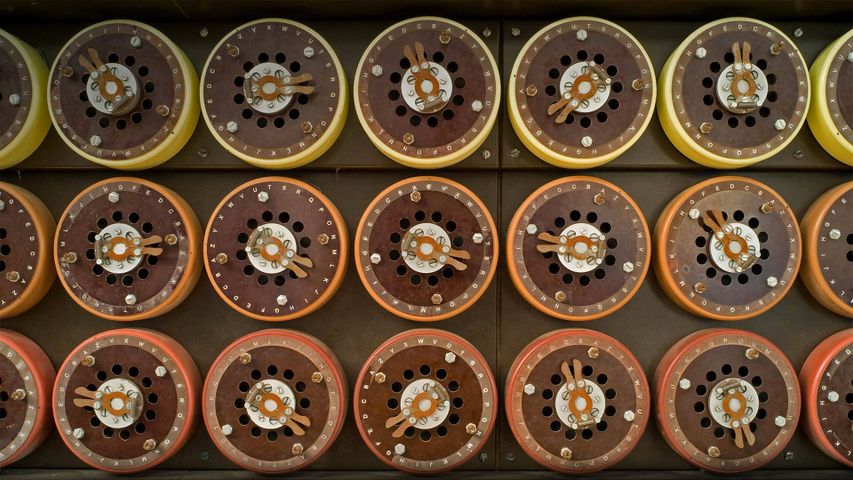 Are we looking at some sort of steampunk time machine? Not quite, but these clock-like rotors did help alter the course of history. The action took place during World War II at England's Bletchley Park, a country estate that served as a top-secret facility. An assembled team, including the pioneering computer scientist Alan Turing, developed this device, known as a ‘Bombe’ machine. It was instrumental in cracking the Germans' 'uncrackable' Enigma code, which was used for encrypting secret messages in German war operations. The Enigma code was itself generated by a rotor-driven machine that re-scrambled the code each day—so the Bombe mirrored those mechanics to keep up with the changing encryption. Insights the Bombe and other programmable machines provided into enemy military plans helped to speed the Allies' eventual triumph—some even argue that the codebreakers' efforts won the war.

Now it's the future, and Bletchley Park hosts the UK's National Museum of Computing. And thanks to forward-thinking educational efforts, computer science is no longer such an enigma. Computer Science Education Week, taking place this year December 7-13, is an annual event aimed at inspiring students to pursue CS. It's organised by Code.org, a resource for short coding tutorials themed around 'Star Wars,' 'Frozen,' and more. During CSEdWeek, people of all ages are invited to try Code.org's Hour of Code, a range of fun yet intensive 60-minute coding sessions offered through its website.