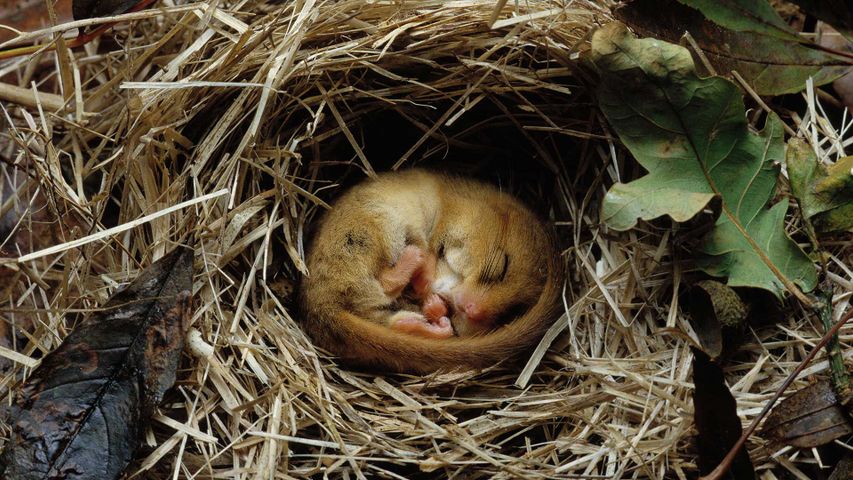 Bedding down for winter

Hello sleepyhead! This endearing little chap is a dormouse, one of the few British mammals (alongside hedgehogs and bats) to go into hibernation over the winter months. October’s the time they bed down for the winter, weaving tiny nests the size of tennis balls out of grasses, bark and leaves.

They stay curled up on or near the forest floor and in hedgerows, using their furry tail to keep them warm. It’ll be seven months before they are properly up and about again. Trying to spot a dormouse is a tricky business. They spend much of their lives asleep – even during their waking months they can go into a state of torpor, if need be, to conserve energy. They’re also tiny, weighing between 15g and 40g, very rare and spend much of their waking lives up in trees or in hedgerows looking for food.

It’s thought Britain’s dormouse population, largely limited to southern England, has halved since 2000 for various reasons, including the loss of ancient woodland and hedgerows and milder winters – which can trick them into coming out of hibernation too soon. While you may not see one in the flesh, a hazelnut with a nibbled perfectly round hole is a tell-tale sign that a dormouse, also known as a hazel dormouse, has been nearby.

Valletta, Malta, one of the European Capitals of Culture for 2018

View up to the canopy through holes in an old English oak, Sherwood Forest, Nottinghamshire