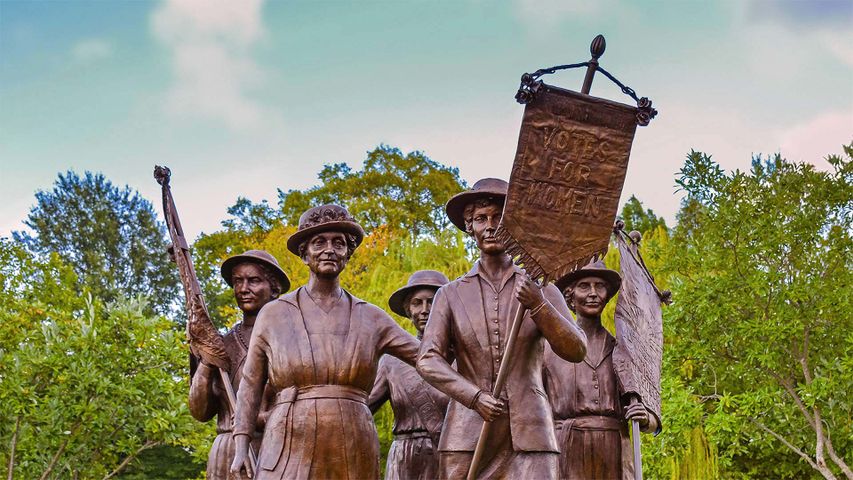 Today marks 100 years since women won the constitutional right to vote in the United States, and we're in Nashville, Tennessee, to celebrate five monumental figures in the women's suffrage movement. Why Nashville? Because it was Tennessee's capital that became the final battlefront in the long fight for the Nineteenth Amendment. On August 18, 1920, the state legislature faced a choice: Should Tennessee become the 36th and deciding state to ratify the amendment, securing its place in the Constitution? The stakes were high as eight states had already rejected the measure—but thanks to some unexpected 'aye' votes from known opposers (one representative switched his vote at the urging of his mother), ratification won out.

As for the five suffrage leaders honored by the monument in today's photo, each was present in Nashville for the ratification vote: National organizer Carrie Chapman Catt traveled to Nashville and mobilized demonstrators for the cause. Sue Shelton White, Anne Dallas Dudley, and Abby Crawford Milton each headed women's rights organizations in various parts of Tennessee and helped bring their groups' voices together for the final victory.

But the landmark achievement of August 18, while indisputably a women's history milestone, wasn't a complete success. That brings us to the fifth figure: local educator Juno Frankie Pierce, a key activist in the Black women's suffrage movement—a national force that wouldn't see its goals achieved for decades to come. In Tennessee and the rest of the South, African Americans' voting rights were long denied under Jim Crow laws—as were those of Native American and other minority voters in many parts of the country. The Voting Rights Act of 1965 put protections in place for previously suppressed voters, finally guaranteeing votes for marginalized groups, but voter suppression remains a concern even today in the US and around the world.