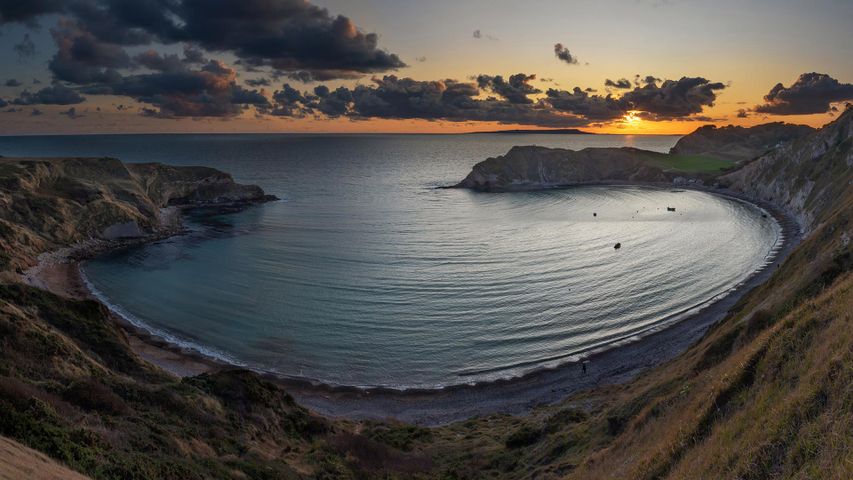 Welcome to Lulworth Cove, one of the most popular sights along Dorset’s Jurassic Coast – a Unesco World Heritage site known for its amazing geological features. This sunset picture illustrates the movement of waves which have helped sculpt the cove over thousands of years. As they enter through its narrow entrance, they bend into an arc shape, cutting out that horseshoe-shaped hollow.

Lulworth Cove sits here on England’s south coast on what’s known as a concordant coastline. It means there are layers of different types of rock which run parallel to the coast. Here, the sea has gradually forced its way through a weakness in the harder outer Portland limestone layer, dating back to the Jurassic period, before hitting the softer clays and sandstone layer behind it, where the cove widens. It slowed when it hit the more resistant chalk layer, formed during the Cretaceous period, at the back of the cove.

The rocks here have been laid down over 150 million years but have been contorted and sculpted by tectonic movement and natural erosion, leaving steeply tilted layers and striking coastal landforms which now attract hundreds of thousands of visitors. While it is always busy during the summer, this year there have been attempts to limit visitor numbers to this part of the coast due to the coronavirus pandemic, after crowds flocked there when lockdown was eased.