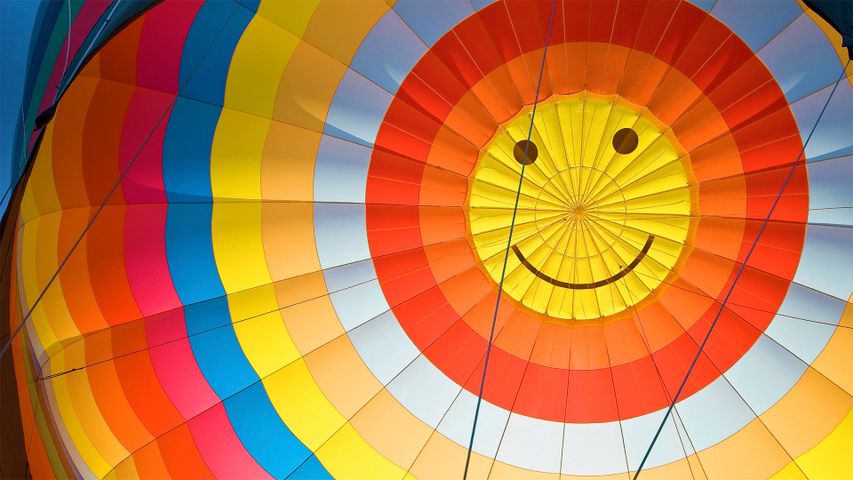 Most versions of the calendar emoji (📆) always give the date as July 17 - ever wondered why? Well, for the real nerds among you, it's because July 17, 2000, is the date Apple first rolled out its iCal app (the icon for which inspired the iPhone calendar emoji). But if your reaction to that trivia is 😴, just think of it as a good reminder - like the smiling interior of the hot air balloon in today's photo - that today is World Emoji Day. 🥳

If you still type :-D instead of 😀 to express joy, you're certainly old-school, but maybe less so than your (grand)kids think. Even Harvey Ball - who designed the iconic yellow-pated smiley (a prototype for 🙂) way back in 1963 - was late to the emoji party: A clay pot discovered in Turkey bears the oldest known cartoon of a smiling face, which dates back about 4,000 years.

These days, emoji are a virtual second language for the whole 🌎 under the Unicode Standard for text encoding, which ensures that text characters from A to Z to Æ to ‽ to 💯 display similarly across communication platforms and languages. The underlying code is overseen by the Unicode Consortium, a humble US nonprofit despite its vaguely dystopian name. Actually, it's quite the democracy: Anyone anywhere can make a case to create an emoji, so if you've got an idea for a 🔥 new one, get over to unicode.org and fill out a proposal. 😎

Close-up of chairlift during sunrise in Mt Hotham, Victoria