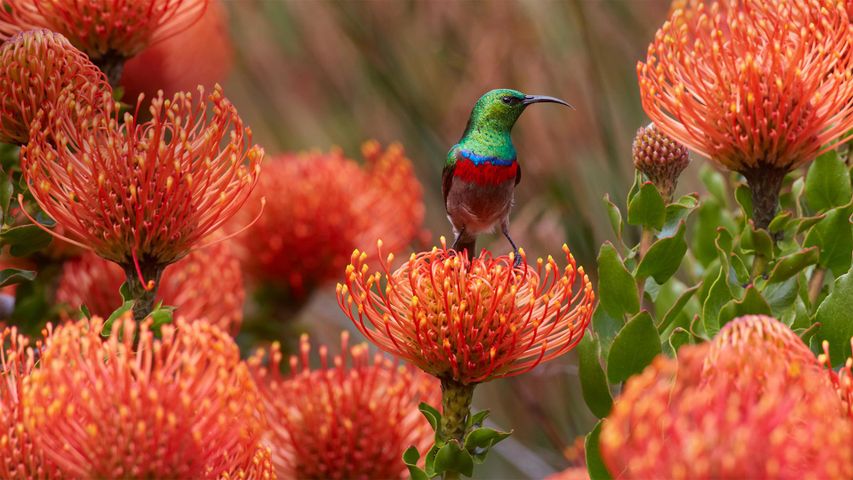 Pollinators: not to be sneezed at

As National Pollinator Week kicks off today, you might ask yourself why a US Senate resolution would officially dedicate a whole week to bees, birds, bats, beetles, and other critters that move pollen from plant to plant. True, on days when your eyes are rubbed red by lunchtime and the Allegra won't seem to kick in, you might not think the world of pollen. But in ways that transcend sinus clarity, your world wouldn't be the same without pollinators—they're to thank for as many as one in three bites of food eaten in the US. Pollinator Week is meant to highlight problems—like climate change, pollution, and invasive species—that threaten pollinator animals, especially bee populations that are already declining.

The pollinator we're featuring today—a male southern double-collared sunbird—is hanging out on a rocket pincushion flower not only to complement his groovy vibe, but also because the bright-orange bloom is providing his lunch. The sunbird family of nectar-feeders extends from here in South Africa throughout warmer parts of Europe. Sunbirds are unrelated to the Americas' hummingbirds, but the two feathered families' similar, florally rich habitats set them on similar evolutionary paths—a phenomenon called convergent evolution—to become key pollinators in their ecosystems.