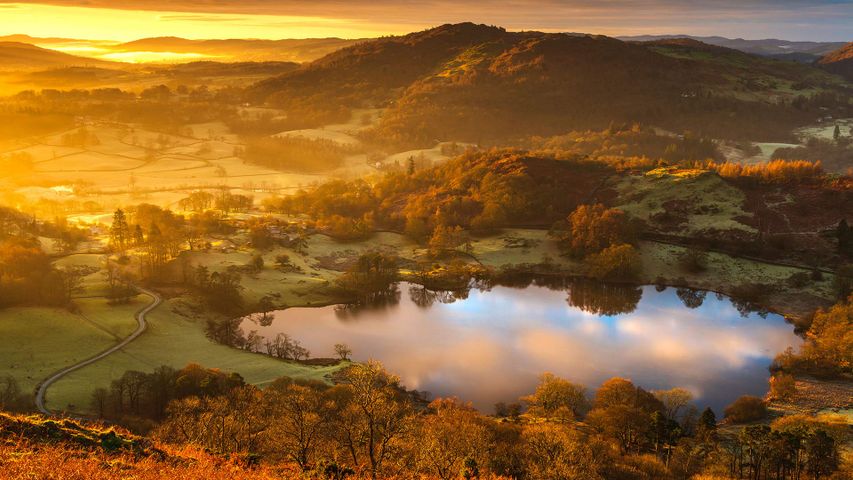 Mirror on the fells. Reflecting the beauty of the fells

As the sun rises on Loughrigg Tarn, in the heart of the Lake District, you can see why the poet William Wordsworth likened it to Italy’s Lake Nemi, describing it as “Diana’s looking glass … round, clear and bright as Heaven”. This small, nearly circular tarn just north of Windermere reflects surrounding fells in its clear waters which, in the summer, are decorated with water lillies. Of the 16 lakes in the Lake District, only one is actually called a lake – that’s Bassenthwaite Lake. All the others are “meres” or “waters”. And then there are numerous smaller tarns like this one - "tarn" is derived from the Old Norse word for pool.

While Loughrigg Tarn, nestled beneath Loughrigg Fell near the popular tourist destinations of Grasmere and Ambleside, is considered one of the Lakes’ hidden treasures, it’s pretty accessible as it is one of the lowest tarns in the national park. It’s also (relatively) warm and popular with wild swimmers. Offering great views, including of the rugged slopes and summits of the Langdale Pikes, it won’t disappoint visitors. And if it looks familiar, it might be because it also featured in a film about another famous writer inspired by the Lakes – the Beatrix Potter biopic Miss Potter.