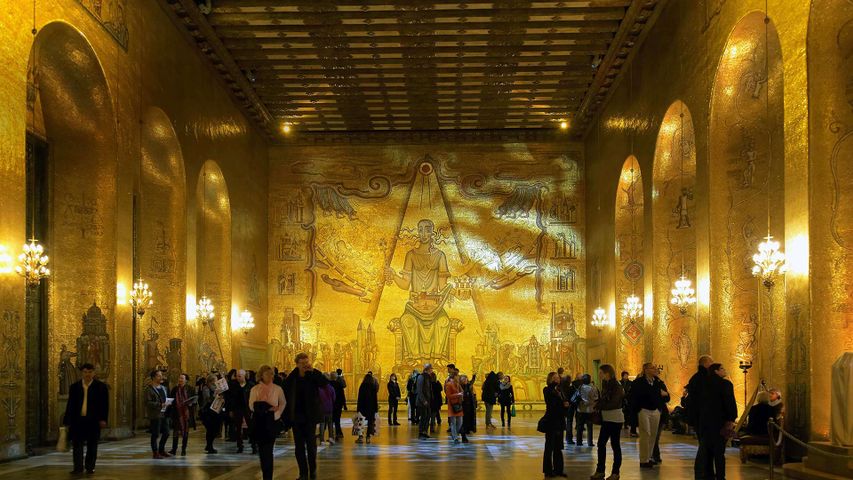 This opulent room is the Golden Hall, a banquet hall in Stockholm City Hall, which will be one of the venues for today's Nobel Prize Award ceremonies. The room, which is completely covered in mosaic tiles, includes representations of important people and places in Swedish history, including the large mosaic of the Queen of Lake Mälar—a reference to Lake Mälaren, a large lake near Stockholm—with the city of Stockholm in her lap, that appears in today's image.

Tonight, on the anniversary of Alfred Nobel's death, most of this year's Nobel laureates, the King and Queen of Sweden, and more than 1,000 guests will attend the award ceremony at the Stockholm Concert Hall. There the King will present the winners with a gold medal, a unique handcrafted diploma, and a document confirming the monetary amount of their Nobel Prize (nine million Swedish krona or about 66,308,625 rupees this year). Next, this same group will attend the Nobel banquet in the Stockholm City Hall's Blue Hall, followed by dancing here in the Golden Hall. These events are the culmination of a more than 14-month process of nominations and selections by the Nobel Committee and other institutions.

Moon installation during celebrations for the Mid-Autumn Festival in Kuala Lumpur, Malaysia