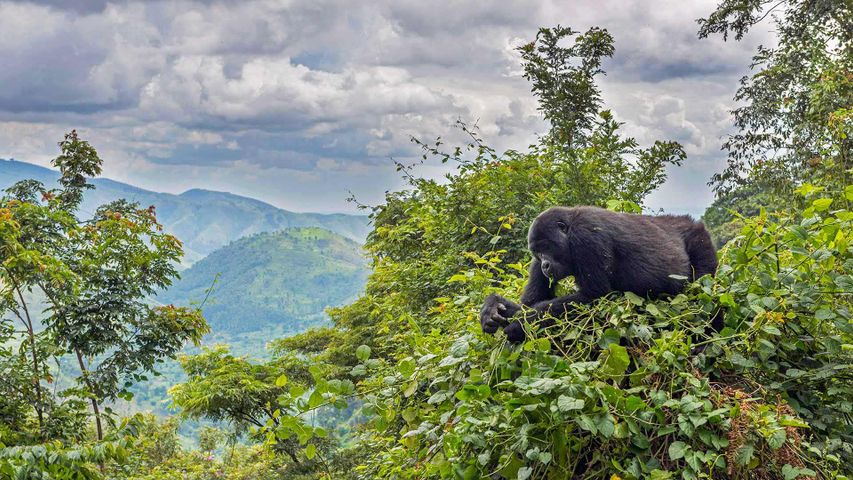 In the canopy of Uganda’s Bwindi Impenetrable National Park, a mountain gorilla leans into a meal of succulent green leaves. By day’s end, she’ll likely eat close to 40 pounds of foliage. Locals call this forest Bwindi, which means ‘impenetrable,’ but to this mountain gorilla, it’s simply home. Like us (and all primates), these gentle giants have opposable thumbs, which makes picking and eating an easy task. Also like us, mountain gorillas prefer hanging out on the ground. In fact, they’re known to stand upright and walk short distances with a remarkably human-like gait. We humans share 98 percent of our DNA with gorillas (both the Eastern and Western species), nearly as much as we share with chimps and bonobos. So yes, even though they have more body hair, we’re all hominids.Today, on World Gorilla Day, we celebrate these great apes and support the ongoing work to protect them. While all gorilla species are endangered, only about 1,000 mountain gorillas are still living in the wild, making them critically endangered. It’s largely thanks to the pioneering work and selfless dedication of primatologist Dian Fossey that many of us are aware of their plight. Today, gorillas remain plagued by the same threats Fossey witnessed more than four decades ago: poaching, disease, destruction of habitat, and human conflict. But census reports are reassuring; there are signs that the mountain gorilla population is increasing, but conservation efforts are critical to the species’ survival.