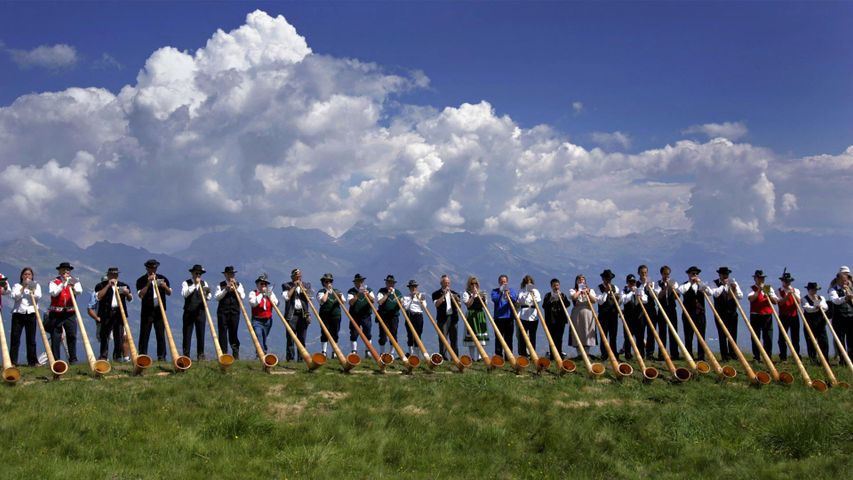 Step aside yodelers, this hill’s for alphorns. The party’s just starting

To usher in the summer music festival season, we take you to a pastoral hillside in the Swiss Alps for the International Alphorn Festival held each summer near the town of Nendaz. Musicians are gathering here this weekend to celebrate and blow these enormous traditional horns of the Alps. No one really knows the origin of the alphorn. We do know that for centuries, European mountain folks from the Alps and east to the Carpathian Mountains used this horn to signal to each other across great distances and to call in animal herds. Even though the horn has no valves or keyholes, it’s not easy to play and requires great lung power.Along with the Tibetan horn, the Australian didgeridoo, and South American erkencho, the alphorn shares the distinction of being one of the world’s original wooden wind instruments. Its design remains relatively unchanged over the past several centuries. Alphorns were once carefully carved from single pine trees that grew on slopes, so the trunk naturally curled into the horn shape you see resting on the ground. Nowadays, alphorns can be made using different types of wood forged from more than one piece, but it’s a serious infraction to compete with one not made entirely of wood. Best of luck to those competing for prizes at this year’s Alphorn Festival—may you blow your horns loud enough for us to enjoy here in North America.